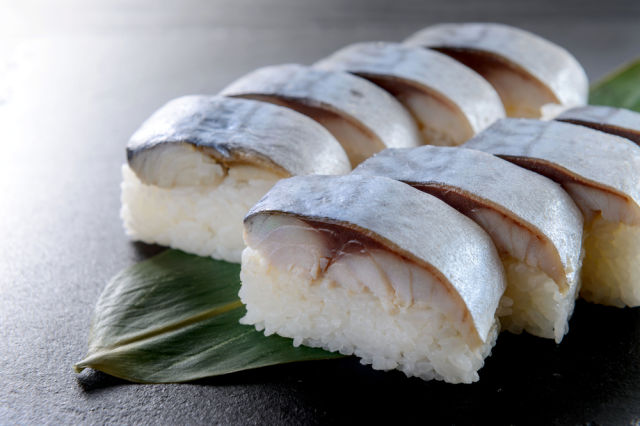 Although Born In Osaka, Why Does バッテラ ばってら Battera Have a Portuguese Name? (Usually written in katakana バッテラ as it is derived from a foreign language.)

Low in calories and good for one’s health, “sushi” is currently undergoing a world boom.  When foreign actors who come to Japan to promote their movies are asked what their favorite Japanese food is, many of the stars reply that it is sushi.

Nevertheless, up until 30 to 40 years ago, it was virtually impossible to find a sushi restaurant in a foreign country.  I’ve heard that raw fish was not regarded as a food for human consumption in America and other countries.  Nowadays, however, sushi restaurants can be found all over the world.  Authentic sushi shops where sushi is hand-made right before your eyes are no longer a rarity.

This is not to say that the globalization of sushi in recent years was anticipated, but there is a sushi that had already been given a foreign name around the 1950s.  This sushi is バッテラ battera, pressed sushi topped with pickled mackerel, which was born in Osaka.

For the original バッテラ battera, shad (“kohada” in Japanese) was used instead of mackerel (“saba” in Japanese).  In the beginning, this pressed sushi was created as a way of enjoying shad when, during one year around that time, there was a large catch of shad and this fish became easy and inexpensive to purchase.

The present day バッテラ battera in which mackerel is used is made by placing mackerel and rice seasoned with vinegar in a wooden frame, pressing it down and then removing the wooden frame to form pressed sushi that is square in shape.  However, around the time when the pressed sushi with shad began to be made, the shape was like a small boat with a thick middle and tapered ends because a cloth was used to press the sushi.

At that time, a small boat was called a “batteira” in Portuguese (which was pronounced as “batteira” or “battera” in Japan).  As a result, the pressed sushi in the shape of a small boat began to be called バッテラ battera.

Before long, when the amount of shad caught dropped and the price increased, mackerel soon replaced shad.

The small boat-shaped pressed sushi with shad is now long gone, but I would really like to try it someday.

The most embarrassing job failure among Japanese biz people