Garigari-kun Ice Cream and Its History

Garigari Kun is the ideal ice pop for hot summer days.  Its “You win, get one free” fun system, unforgettable cropped-haired character, and commercial song are well known.  Shaved ice that children could eat in one hand was the concept behind the development of Garigari Kun.  It has now become a long seller enjoying wide support from children to adults.  So let’s take a look at the history of Garigari Kun that will be celebrating its 40th anniversary next year. 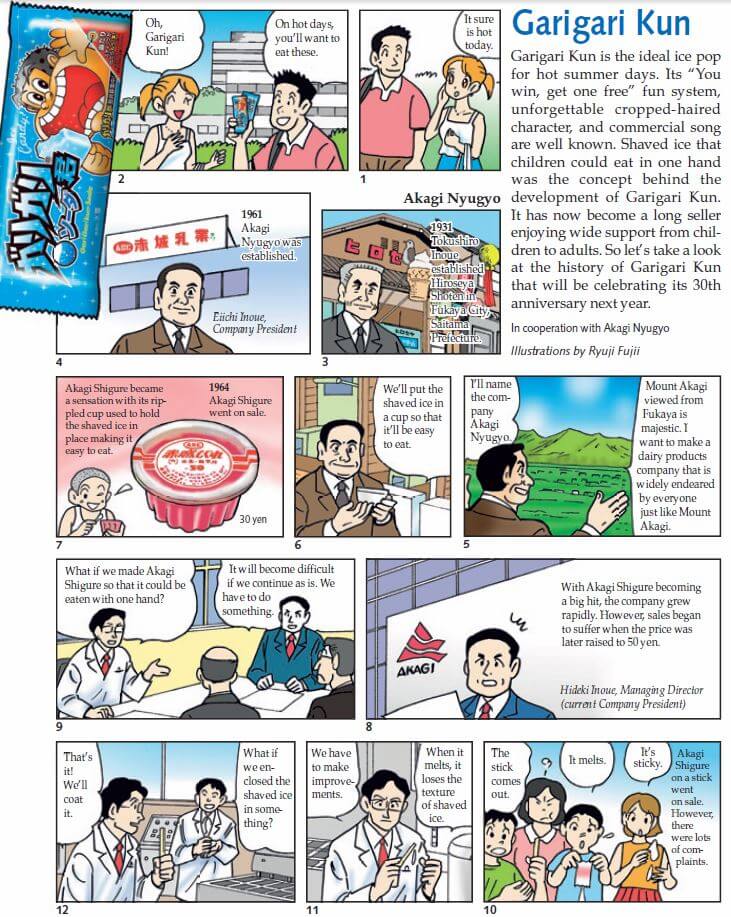 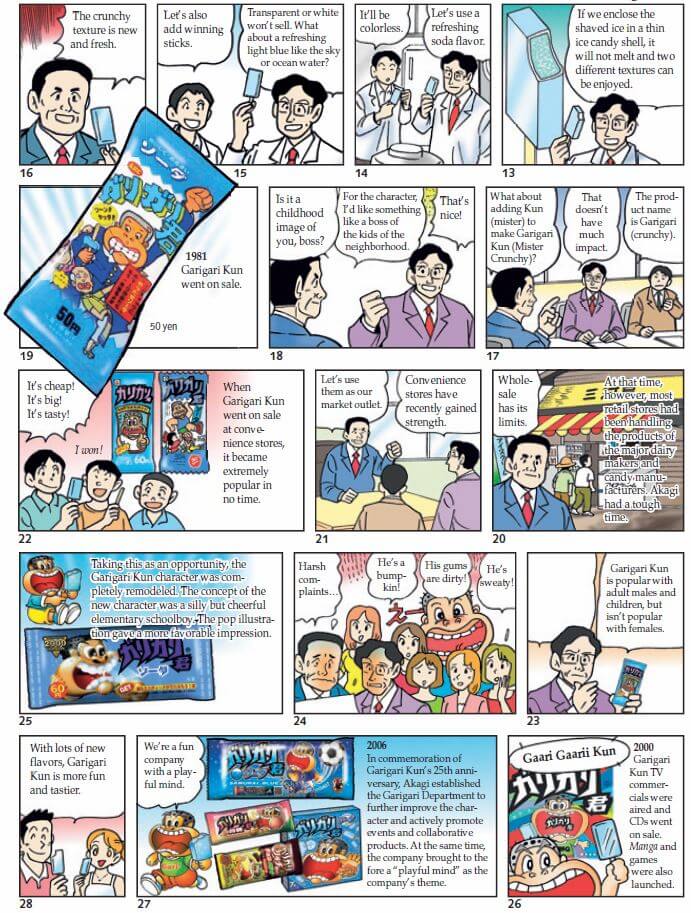 5. Mount Akagi viewed from Fukaya is majestic. I want to make a dairy products company that is widely endeared by everyone just like Mount Akagi.

Akagi Shigure became a sensation with its rippled cup used to hold the shaved ice in place making it easy to eat.

8. With Akagi Shigure becoming a big hit, the company grew rapidly. However, sales began to suffer when the price was later raised to 50 yen.

9. It will become difficult if we continue as is. We have to do something.

What if we made Akagi Shigure so that it could be eaten with one hand?

10. Akagi Shigure on a stick went on sale. However, there were lots of complaints.

The stick comes out.

11. When it melts, it loses the texture of shaved ice.

We have to make improvements.

12. What if we enclosed the shaved ice in something?

If we enclose the shaved ice in a thin ice candy shell, it will not melt and two different textures can be enjoyed.

14. Let’s use a refreshing soda flavor.

15. Transparent or white won’t sell. What about a refreshing light blue like the sky or ocean water?

16. The crunchy texture is new and fresh.

17. The product name is Garigari (crunchy).

That doesn’t have much impact.

Is it a childhood image of you, boss?

20. At that time, however, most retail stores had been handling the products of the major dairy makers and candy manufacturers. Akagi had a tough time.

Wholesale has its limits.

Let’s use them as our market outlet.

22. When Garigari Kun went on sale at convenience stores, it became extremely popular in no time.

His gums are dirty!

25. Taking this as an opportunity, the Garigari Kun character was completely remodeled. The concept of the new character was a silly but cheerful elementary schoolboy. The pop illustration gave a more favorable impression.

27. 2006
In commemoration of Garigari Kun’s 25th anniversary, Akagi established the Garigari Department to further improve the character and actively promote events and collaborative products. At the same time, the company brought to the fore a “playful mind” as the company’s theme.

We’re a fun company with a playful mind.

28. With lots of new flavors, Garigari Kun is more fun and tastier.

Office Etiquette for Eating and Drinking