1. How many people worldwide are studying Japanese?

2. In how many countries is Japanese being studied?

What are your answers?  A million people?  A hundred countries?  To tell the truth, the precise numbers are not known.  The reality is that surveys are not useful because there are also people who are studying on their own.  Nevertheless, a survey on overseas Japanese language institutions, which was taken in 2009 by The Japan Foundation (actively involved in the promotion of international understanding of Japanese culture and art as well as Japanese language education), showed that the numbers in question had increased significantly to over 3.65 million people in 133 countries when compared to a survey taken in 2006.

Chinese national Go Kei on the staff of a major Japanese language school in Tokyo said, “The number of students increased yearly up until the Great East Japan Earthquake of March 11.”  Tomoko Suzuki in charge of public relations with Sakura House, a company which runs more than 200 guest houses for foreigners in Tokyo, stated, “The number of foreigners staying short-term at the guest house for the purpose of studying Japanese has been increasing for the past several years.”

When we asked an 18-year-old French male whom we met in the office of Sakura House why he was studying Japanese, he answered, “I am studying Japanese because I became hooked on Japanese anime.”  He then gave us several examples of anime titles in fluent Japanese, which we are not familiar with.

Certainly, in regards to the question in the above survey about the purpose of studying Japanese, the most common replies were “interest in the Japanese language” and “communication” followed by “knowledge of manga and anime.”  Raj Nawa who came to Japan from Nepal in March of this year said, “I came to study Japanese in order to find work in Japan.”  Although his main reason for studying Japanese is to find employment in the future, Raj said that he was also interested in Japanese pop culture.

Now, it is probably natural that people studying a foreign language want to know objectively their actual level of proficiency in the language.  Moreover, if they think of employment, they might also need to verify objectively their language proficiency.  For English, there are the standard tests of TOEFL and TOIEC.  For Japanese, the Japanese Language Proficiency Test (JLPT) administered by The Japan Foundation is the most well known.  In 2009, The Japan Foundation increased the number of tests to twice a year.  In 2009, approximately 770,000 people worldwide took the test.  The test is divided into five levels N1 to N5 with N1 being the highest level.  There are the following two requirements to pass the test:  ① The overall score must reach the required pass mark and ② The points earned in each category must reach the pass mark set for each category (according to The Japan Foundation’s home page).  According to Korean national Oh Junhui who had previously worked for a Japanese company, Japanese corporations are looking for people with a proficiency level of at least N2.  Looking at actual job offerings, it is clear that most of the ads are aimed at recruiting people that have JLPT N2 or higher.  However, Oh said, “Since most Koreans are fluent in Japanese, only level N1 is a must for Koreans if you want to work in a Japanese company.”

Nevertheless, even if you cleared this hurdle and were hired by a Japanese company, you would still have to continue studying Japanese.  You cannot neglect further study because there are expressions and words specific to the business world.  The Business Japanese Proficiency Test (BJT) is used to measure the Japanese language skills in a practical business environment.  Some Japanese companies make this test a must for persons wanting to move into a manager position.  In some foreign investment companies, this test is used for selecting the people to be sent to Japan on business.  As such, the test is relatively difficult.  “Most of the people that take the test have JLPT N1 or N2,” views Hirofumi Jinno who is working for the BJT at the Japan Kanji Ability Testing Foundation which administers the BJT.

■Overview of the BJT

Some people value the BJT as a test of ability in contrast to the JLPT which is a test of understanding.  For example, one question asks how you should respond to a telephone call from a client that requests you to ask the company president for his or her schedule.

In this question, to complete the sentence ”ではそのように、社長に（     ）(Then, I’ll (      ) the company president),” you are expected to choose one of the following four expressions:  ①お伝えします ②お話します ③申し上げます ④申し伝えます.  In English, maybe the word “talk” can always be used.  In Japanese, however, you must choose your words depending on who you are talking to.  Whether one can use proper Japanese expressions is essential for doing business.  Actually, this proper usage is not easy even for the Japanese people.  In this example, the correct answer is ④.  In addition, expressions such as業界 (business community) and日報 (daily reports) that are frequently used in business but are not commonly used in daily conversation often appear in the BJT questions.  Perofy Thomas, a Frenchman working for a Japanese foreign investment company, said that knowledge of accounting including Japanese accounting standards and the taxation system is required so that learning the fundamental vocabulary for business is mandatory.  He aims to obtain a high score in the BJT test.  The BJT uses a scoring system different from JLPT.  “Since the examinees’ scores can be compared whenever they take the test, it is easy for us to see the level of proficiency of each person and use it as a guide for Japanese language instruction for them.” (Factory Manager Yasuyuki Kagara of Sanyo Kasei Ltd. in Thailand)  As such, overseas Japanese companies also favor this test.

Like the JLPT, the BJT is also offered twice a year and various prep books are available.  However, since many of the questions deal with practical business matters, it is difficult to study by yourself.  For example, in a question where one has to select the correct answer based on the photograph of a business scene, a person that has actually engaged in business will have a better chance.  Because of this, Jinnno advises that the best method for studying for the BJT is to actually intermingle with Japanese people.  Because more and more Japanese companies will be moving overseas, it is expected that companies and employees that use the BJT as an indicator will increase.

■Overview of the JLPT

The Japanese Language Proficiency Test (JLPT) is a certificate examination started in 1984 that verifies the Japanese language proficiency of people whose mother tongue is not Japanese.  The Japan Educational Exchanges and Services and The Japan Foundation have administration over the test.  The test is given in 58 countries and regions throughout the world including Japan (as of 2010).  Out of all of the Japanese language tests targeting people whose mother tongue is not Japanese, this test is taken by the most number of people (approximately 770,000 people in 2009).  The test is divided into five levels N1 to N5 with N1 being the highest level.  The test is also used as a guide for screening applications for the issuance of a Certificate of Eligibility.  The test is offered twice a year once in the middle of July and again in the middle of December. 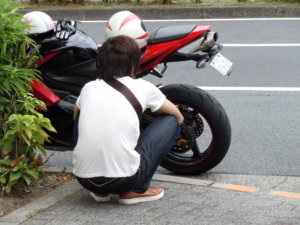 In Japan, Working Not for Yourself But Society