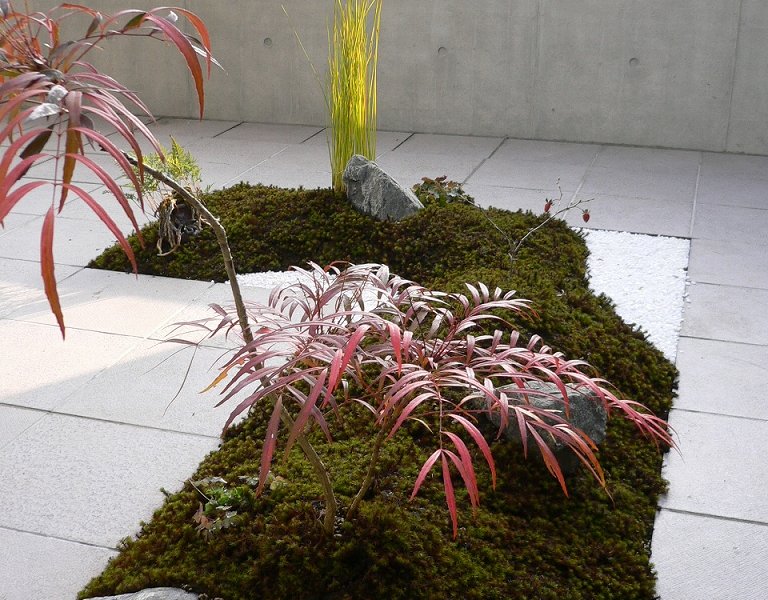 Last year’s unprecedented disaster of the huge earthquake and following nuclear mishap led the Japanese into an electricity-saving mode in a big way. Especially during the summer season when the demand of electricity becomes the highest, the move to make rooftop spaces or verandas with greenery for comfort or to lessen the summer heat spread among companies or local government as well as general households. Besides, to avoid so-called “heat island” and reduce the CO2 emission, recently many metropolitan municipalities provide subsidies for those who cover their empty outdoor space with green. These movements are helping his business, so said Mr. Teddy Jennings who designed Mr. Suzuki’s veranda.

On one afternoon, from his apartment’s elevator, he noticed how barren those verandas in other apartment buildings around his. “Mottainai (wasteful),” he lamented. His own room has a 35-square meter (375-square-foot) veranda which bears a relaxing and moody atmosphere. The Park Hyatt Hotel and other high-rise building in its behind, the veranda features loungers, a dining table and chairs, lighting, plants, and speakers, which fill the air with the lounge-style music. Many who look at the photos are puzzled and ask, “Is it in Tokyo? It must be in a foreign country.”

“That’s the whole business concept. You have a vacation in your own home,” said Mr. Jennings with a grin. He set up a company “Vacation Veranda” which designs one’s veranda to create a cozy, relaxing space two years ago. At the last year’s Hibiya Park Gardening Show 2011, held in October, his team won the silver medal even though it was his first try. Among all the other contesters of major companies, the fact he won the award on a shoe string budget deepened his confidence in his art sense.

Ms. Nori Hamamoto, director and designer of Japan Association Of Professional Garden Designers (JAG) which is one of the organizers for the above gardening show, praised Jennings’ artwork, “It is just the right work for this year’s theme, “suggestion to your lifestyle” and attractive for people living in a big city like Tokyo. Personally it reminds me of my favorite Ubud village in Bali.” Referring to Kurokawa Onsen in Kumamoto Prefecture, which became famous in succeeding in luring tourists back with planting trees and greenery to improve the atmosphere of the whole area, “the attractiveness of trees or plants are being used for business purpose,” analyzed one recent business stream. After the burst of the bubble economy in 1991, Japanese mentality might have changed a little. “Most of the people got very tired and started to pay attention to gardening, wine or natural food and after a while these trend became part of their lives. Trying to get things lost back, or returning to nature,” thought she. Ms. Hamamoto and other designers with JAG do a garden designing for their clients. Mr Yuji Yoshida is one of them who also retails planters and other gardening utensils told, “Recently condominiums sold with big verandas of 1.5 to 2 meter wide. Some of the owners put a table and chairs on it. For that reason, large planters of 50cm diameter or more are well sold.”

Raised in a poor family in Texas which often received a food coupon, Jennings shared a room with three other brothers. But with a good scholarship he graduated from a college when he could have a chance to come to Japan on an exchange program twice, successfully went into a workforce with worldly famous companies like Goldman Sachs, IBM and had a recent job with Ernst & Young. “Before I used to have all of these images of pure status in my head.”But like the Japanese bubble burst in 1991, 9.11 or Leman shock shook his perception of life and changed his way of looking at things. “I used to think I had to live in this neighborhood because it’s famous, or I had to work for this company because it’s famous. Elitism or people say, ‘sugoi (wow!)’ kind of sentiment gave me energy. But it was wrong. It should come from the inside.”

One of Ms. Hamamoto’s clients commented, “In a busy morning, I sip coffee while looking out at the garden. Not that I close the curtain because the garden is messy and I don’t want to look at it, but it is my favorite garden, so opening the curtain and looking at it. Even for a three minute gazing at it changes my life greatly.

Mr. Jennings told that he sits out in a cold winder day at his favorite veranda and enjoy the passing time. Looking at barren verandas of others with a few pots of plants or wet laundry at most, he believes that Japanese needs “beauty.” “They need beauty to add a little color to their life, to not have everything in function, function and function base. It is beautiful that they can focus and do all the hard work and dedicate themselves. But let some of that go a little bit. Have time to rest, have fun and recharge your battery, so you can do other things.”

Japanese people are punctual but waiting can be positive in Japan