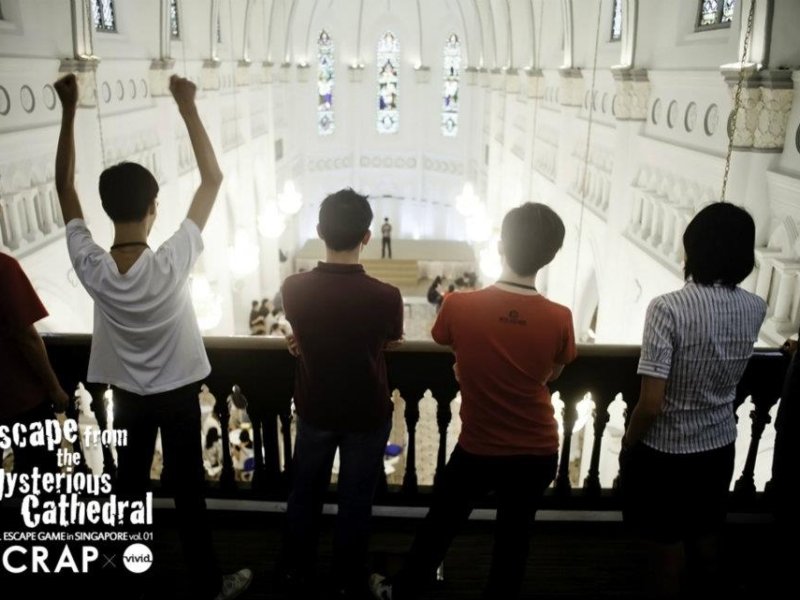 “The walls are cold concrete. The only things in the room are ordinary furnishings – desks, chairs, carpets and so on. Secret codes and mysterious items have been secreted at various places. Somehow, you have been locked up in this place. Now, can you figure out how escape from this puzzle-filled room?”

In digital games, this is a common theme. But what would it be like, if it were to happen in the real world? The room has been furnished with items of furniture and other everyday household items – a desk and chair, a sofa, a sink, and a refrigerator. Cards, arrays of written characters and certain types of tools have been placed at random to provide clues. Put the clues together and rack your brain. If you’re successful, you’ll figure out where the key to the door has been hidden, and the trick to obtaining it. This kind of hands-on escape game, named “The Real Escape Game,” is being organized in places around Japan, and has been attracting lots of attention.

Overseeing the operation of these games is a surprisingly small company in Kyoto called SCRAP, whose main business has been the editing and publication of a free magazine. The company’s representative, Takao Kato remarks, “The business model, of earning advertising revenues from a free magazine, failed a long time ago.” In 2004, SCRAP had started publishing a bi-monthly free magazine from Kyoto. To diversify their business, the company organized events linked to the feature articles in the magazine and made money by charging participation fees.

Then in 2007, SCRAP organized a feature story on puzzle-solving games, which featured a real escape game, held in Kyoto, in which participants had to decipher codes and find the answer to trick questions in order to escape from a certain place. The players’ task was simple: work together as a team to escape from the room within a preset time limit. The tickets for the first event completely sold out, as did those for the second. And many people showed great interest in participating in its future events.

These events spread to Osaka in 2008 and Tokyo in 2009. As their popularity spread by word-of-mouth, the number of participants per event increased from the hundreds to the thousands.

In May 2011, SCRAP arranged to rent Tokyo Dome, a covered stadium in central Tokyo used mainly for baseball and music concerts, for three days of events. Each event attracted about 1,200 participants, totaling about 12,000 people in all. Each event required a total of two hours – the first hour for orientation and then one hour for participants solving the puzzle. No big gimmicks were required. As Kato explains, “We had about 30 staff members on hand. Preparation is just putting up about 30 panels in the Dome. Cleaning up afterward takes us around 40 minutes.” All SCRAP provides for participants is an answer sheet and a pen. The ticket cost 2,800 yen ($35).

The original escape game was a new genre of video game that became popular after it began appearing on the Internet and mobile sites from around 2004. The big shift to “reality” happened when SCRAP, thinking it would be interesting to do it in real life, organized an event and wrote a feature article about it in their free magazine.

Events were not held on a regular basis until a year ago. But since last summer, SCRAP set up its first permanent venue for the Real Escape Game, at a condominium apartment in Tokyo’s Shinjuku area. In April of this year the company opened another site in Tokyo and one more in Kyoto. The momentum is still building up.

What’s more, since the end of 2011 the Real Escape Game has moved overseas. The first event took place in Shanghai, followed by Taiwan and Singapore in January and San Francisco in March. In every case, tickets sold well and the events were considered successful. “What was exciting about Shanghai was that it gave us confidence (about expanding overseas). We hope the game will be accepted in Europe, too, where analog games are popular,” says Kato, who is contemplating aggressive overseas expansion in the future.

Companies are unlikely to overlook its promotional capabilities. As Kato says, “In a room in an empty building, or at a deserted amusement facility, if we bring a story and a puzzle, people will come. There is a wide range of uses [for this game].” We can expect to see business applications of the Real Escape Game. In fact, the number of businesses with their eye on the power of its contents has been increasing.

In September 2010, an event titled “Escape from the Amusement Park at Night” was held over a total of nine days at the Yomiuri Land amusement park in western Tokyo. It drew about 10,000 people. In October of last year, a similar event was held over seven days at Nagashima Resort Amusement Park in Mie Prefecture; more than 1,000 participants per day thronged the park.

A man who describes himself as single and in his 30s posted some of his impressions of the Real Escape Game on a blog. “I got impatient because other people were quickly solving the puzzle and getting ahead of me.” But, he added, although in the end he was unable to make his escape, “being able to walk through the amusement park at night was refreshing. I want to take part again.” Overall, he was satisfied. A woman in her 30s who said she was a repeat customer explained the game’s allure: “I can experience a sense of accomplishment that I never get from my job, and enjoy the fusion of reality and fantasy. The feeling I got when I solved [the puzzle] was unbeatable.”

The Real Escape Game has also shown its effectiveness when used for promotional purposes. The above-mentioned Tokyo Dome event was sponsored by Morinaga, a major manufacturer of confections. The game code was linked with Morinaga’s popular “Choco Monaka Jumbo” ice cream bar. Afterwards, stocks of “Choco Monaka Jumbo” were snatched up from the shops around the event site. “If the solution to the puzzle is hidden in a product, the happy feeling when you realize the solution is there or the disappointment when you can’t break the code, are deeply imprinted as a real experience, along with the image of the product,” says Kato. In addition to Morinaga, puzzle solutions have been linked to and used as publicity for products by Red Bull energy beverage and Reebok shoes as well.

Readers may wonder how wide-ranging the demand for puzzle-solving and escape games could possibly be, but in fact, SCRAP has also received requests that even extend to job recruiting. Drecom, which provides social gaming applications and internet marketing services, incorporated the Real Escape Game into their recruitment activities for new university graduates. Their recruitment site reads, “At Drecom, we think conventional recruitment activities are boring, so to make our information session a little more fun, we’ve collaborated with the Real Escape Game.” Adopting a game for recruitment activities is a novel idea. Because those who escape successfully are automatically accepted for the next round of interviews, last year the company had more than 1,000 applicants, well over the recruitment quota of 700, so it was obliged to select qualified workers using a lottery system. In a magazine interview, the person in charge of recruiting at Drecom told, “As a result, an unusually high percentage of the students were people who like new things, like to use their heads, and have a high affinity for the Internet. The game was very useful for our selection process. It was also good for our branding, as it spread awareness of us as a company that does fun things.”

With revenues approaching three billion yen in fiscal 2011, Drecom is relatively well-known as it appears on Mothers’ (“market of the high growth and emerging stocks”) Stock Market for high-growth startups. However, obscure small- and medium-sized businesses have also been successful in harnessing the power of this strong content to recruit students. “A company information session using the Real Escape Game sounds interesting, and superior students will even come to companies with no name recognition,” says Kato. This new trend has appeared in the past two years, but last year alone more than 20 companies collaborated with SCRAP.

“For the most part, the cost of event planning and production is negotiable, starting from 2 million yen, but to be honest, we are swamped with too many offers,” says Kato, who added, “We have a waiting list for requests.”

The Feeling of Being the Main Character in the Story

The Real Escape Game has started a big movement. But what is its main appeal? “It’s not just controlling a character the way you do in a video game,” explains Kato. He says the attraction is that “you yourself can experience the story by becoming a character. You become the main character.” Also, solving the puzzle as a team, focused on same goal, has some similarities to enjoying club activities and cultural festivals [at university].

What kind of people take part in these events? According to SCRAP, 60% are women and 40% are men, with many of the women in their late 20s and early 30s. About half are repeaters. Some join by themselves, while others come with friends. Of course, at many events it’s fine to solve the puzzle alone, but at about 60% of the events participants who come alone are obliged to join compulsory teams. “It’s easy to talk about the experience of accomplishing something by ‘working together in a group,’ but surprisingly, such a thing rarely happens in real life,” says Kato. Probably another attraction of the Real Escape Game is that participants are able to revert to their university days.

The Subtle Art of Creating Puzzles

“So far, on average 7% of participants manage to escape during an event. The other 93% go home unsuccessful,” says Kato. But these are just numbers. “When we explain the solution, those who failed go home satisfied. And they come back the next time. The bottom line is not just the puzzle, but how to generate the feeling of putting oneself into the story, and whether participants feel gratified when they solve the puzzle.” Day and night, SCRAP’s staff put many hours into discussing and devising the puzzles. Events such as university campus festivals have already attempted to emulate the games, but SCRAP’s strength is the high quality of the puzzles it creates. Incidentally, the name of the Real Escape Game (リアル脱出ゲーム, *Riaru Dasshutsu Geemu*) is a registered trademark in Japan.

When holding events overseas, however, the local language must be used. Japanese uses phonograms and can be written out either horizontally or vertically, so it’s easy to make puzzles. When puzzles are adopted to another language a check by a native speaker is required, but what’s most important is whether or not the key to solving the puzzle is common knowledge. “Are the clues familiar to people nationwide, or just locally? We always check that it’s something all participants are likely to know,” says Kato. When all is said and done, creation of the puzzle is the most important component, and the most difficult.

In the beginning, though, SCRAP was primarily a publisher of free magazines. Even now they still publish about 20,000 copies every other month. When I suggested to Kato during the interview that the free magazine has become the advertising medium for the Real Escape Game, Kato agreed. “That’s right. We’d really like to hold other kinds of events…” But at present at least the company seems to have its hands full with the Real Escape Game. “The [Real Escape Game] boom will continue for another year, but after that I don’t know. We’ll continue to publish the free magazine and work at coming up with new events,” he smiles.