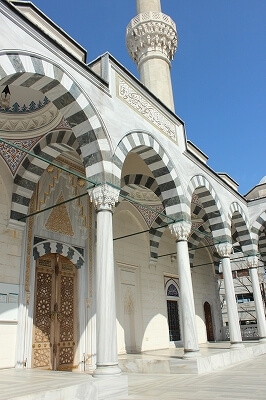 Shared house only for Muslim people

Japan’s first-ever shared house set up exclusively for the Muslim Community has began operations from late February in a posh district of Tokyo.

Such a facility is a reflection on Japan’s growing diversity. According to the Japan Muslim Association, currently about 10,000 Japanese Muslims and 100,000 non-Japanese Muslims reside in Japan — although these figures are difficult to verify statistically, since a person’s religion is not asked when applying for an entry visa or in population census surveys. Nevertheless, a variety of evidence exists that the numbers are growing.

This shared house “SAKURA HOUSE YOYOGI-Uehara Muslim House” is located only about two kilometers away from Shibuya, the metropolitan district of southwest Tokyo. The house is conveniently situated in a quiet neighborhood with a reasonable amount of greenery for a big city, which has attracted many well known celebrity entertainers and business executives to live there. The location is particularly convenient for Muslims. Nearby are a newly refurbished mosque, Tokyo Camii, and a restaurant serving halal (religiously permissible) dishes. The house can accommodate up to more than 20 residents. Outside the inviting entrance, trees of different kinds greet the arriving visitors. Its spacious garden, a perfect place for social events or just relaxation, is another of its attractions.

Of course some modifications have been made to cater to Muslim residents’ needs. Firstly, this two-story house separated the residents by gender, with first-floor rooms for males and second floor for females. Each floor has its own communal space that includes bathrooms, toilets, a kitchen with several refrigerators and a dining room. A prayer room is supplied with copies of the Quran, a schedule of prayer times and most importantly, an arrow sign indicating the direction of Mecca.

Jun Wakahara, a director at the web marketing department, SAKURA HOUSE Co., Ltd. which operates the house, pointed out some of its other unique aspects.

“There are no worries about mixing shared dishes,” he says. “In other shared houses, Muslims prefer to use their own dishes and kitchen utensils to avoid the risk of these items becoming tainted by contact with pork. They also share refrigerators, since there is no risk of using them to keep pork, since all the residents are Muslim.”

As of the end of March, 2013, the house has six new residents, representing five countries from three different continents: Algeria, Bangladesh, France, Myanmar and Turkey.

One of them, Onur Cem Yilmaz, aged 29, from Turkey, said, “I am very happy that I found this place. It is very comfortable and quiet, yet very convenient. I also like the big garden.”

He is currently visiting Japan for six months and has been studying photography. He previously lived in Ikebukuro, in northwestern Tokyo, for three months, where he paid 40,000 yen ($444) a month. This house costs him 48,000 yen ($533), up by 8,000 yen, but he is completely satisfied with the heartfelt arrangement. Asked if there is any complaint, Onur replied, “There is no Seiyu supermarket here, where I often used to shop. Things are bit more expensive around here.” The Seiyu supermarket chain, affiliated with America’s Walmart, is known for offering food and other merchandise at reasonable prices. However there are many supermarkets available within walking distance.

Onur’s room type is a dormitory style shared by two people. Those dormitory-style rooms are rented out from 46,000 yen ($511) per person, and private rooms cost 78,000 yen ($866). The rents include all utilities and Internet access. Also every week, SAKURA HOUSE sends staff to clean the communal areas.

The rules stipulate a person can live in this big house starting from a one-month duration, but tenants are limited to non-Japanese Muslims. According to Wakahara, however, his company has received numerous inquiries from non-Muslim people.

Japan has been attracting not only more long-stay residents, but also tourists from Muslim countries. Catering to those Muslim travelers is a promising new business phenomenon in Japan.

Just 10 minutes on foot from the shared house is SAKURA HOTEL HATAGAYA, run by a company affiliated with SAKURA HOUSE. They set up a prayer room last November and developed a dish specially for Muslims to be served at its dining room.

“We recently welcomed a group of Malaysians who came here for hanami (cherry blossom viewing),” said Keiko Abe, sub-manager at the hotel. “One young person found our prayer room and used it often.”

The hotel has already attracted some repeat customers and its reputation has been spreading by word of mouth, with more visitors coming through introductions by their friends.

Also a staff member from Egypt came up with an idea to provide hookahs (water pipes) which are widely popular in the Middle East and other Muslim countries. He also developed kushari, a popular Egyptian dish consisting of rice, lentils, chickpeas and macaroni topped with tomato sauce and fried onions. While kushari is a vegetarian dish, the hotel also plans to prepare dishes using halal meat.

Can Japan Overcome the Innovation Dilemma?