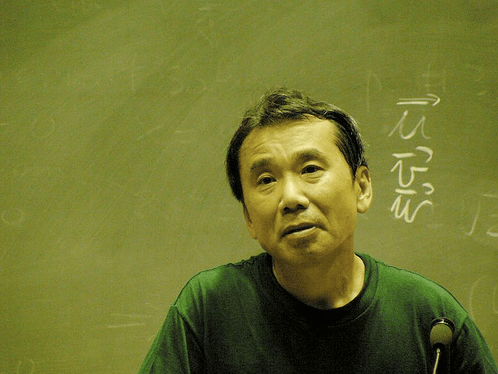 “Resonating Under”: Haruki Murakami Speaks in Public After 18-year Hiatus

“I rarely put myself in the public eye,” Haruki Murakami explained. “I don’t show myself on TV or radio. Nor do I give lectures. But for I have appeared at this event, to commemorate my mentor.”

So saying, world-renowned novelist Murakami gave a public lecture in Japan, his first in 18 years. Kyoto University, the venue, swarmed with some 500 attendants from around the country, who were chosen by a lottery. The mass media was represented as well, with over 40 reporters from Japan and abroad, including correspondents from The New York Times and Associated Press.

When the master of ceremonies asked the audience, “How many of you came here by Shinkansen or airplane?” around half of them raised their hands. A-30-year old woman from Chiba Prefecture told she came here for a day trip by Shinkansen and said, “I’ve been a fan of him for 20 years. This is once-in-a-blue-moon chance.” She described Murakami’s literary magnetism, saying, “In his novels, I can feel something which can’t be felt in ordinary life. It resonates deep down and I can connect myself to it.”

This event was held in commemoration of the newly established Hayao Kawai literature awards. Hayao Kawai (1928-2007) was a Jungian psychologist who headed the government’s Agency for Cultural Affairs from 2002 to 2007.

Haruki Murakami appeared in casual attire: wearing a blue-and-white checked short sleeves over a dark-blue T-shirt and salmon-pink jeans with blue sneakers. The first half of the event was a lecture-style one-man monologue. Murakami was deeply associated with Kawai and said, “There are few people who I call ‘teacher,’ but I can help but call him ‘teacher.’” He expressed his reverence for Kawai.

“Stories reside deep down in one’s soul. They are indispensable for each of us to live and can connect one another at each root. As a novelist I go down to that depth and so did Mr. Kawai but as a clinical psychologist. Not expressed orally, but we understood each other psychologically, just like dogs sniffing for understanding each other. And Mr. Kawai was and still is the only person who truly accepted my stories. It was very helpful and appreciative,” said Murakami.

Murakami mentioned that Kawai often made very innocent jokes while imbibing alcohol together with people and analyzed the reasoning.  “Daily, Mr. Kawai would meet his clients and descend deep down into their privacy. It often entailed the possibility of danger. Perhaps he might lose his way back and wander in the darkness while some murky, intangible substances became snarled in his body like tangled yarn. Perhaps he would make those casual jokes to shed off those entanglements,” Murakami said, adding that he often goes jogging to rid himself of those substances.

Going Down Deep for a Good Work

The second half of the event featured an interview-style talk session. The interviewer, literary critic Yutaka Yukawa, stated, “Mr. Murakami, you liken a human being to a two-story house. The family members go in and out of the house on the first floor. On the second floor are the rooms for each family member. They sleep, listen to music or read books. They live their own lives. And in the basement, there are bits and pieces of remnants of memories. But each person’s true story, drama or world is not found there. You go down deeper to the second basement, where the darkness is so impenetrable, you can’t see where the floor begins. In that space, the true stories are found.”

Murakami responded by saying, “I separate human souls into second floor, first floor, first basement and below that, second basement, the latter of which is an unknown and obscure place. Normally when people compose songs or write novels, they go down to their first basement. You can make stories through the place, but they lack appeal.

“A work done in first basement can be easily evaluated because it is easy to understand. But a work excavated from second basement can’t be judged easily because sometimes it does not seem logical. If you really want to create something unique, you need to descend to the second basement. Mr. Kawai understands this notion.”

Latest Novel As a Progression Story

The interview then turned to Murakami’s new novel, Shikisai wo Motanai Tazaki Tsukuru to Kare no Junrei no Toshi (Colorless Tazaki Tsukuru and the Year of His Pilgrimage), sales for which have broken his own record, with one million copies sold in just seven days. “While the previous work, the ‘1Q84’ trilogy, erases the boundary between reality and illusion or shifts between them, the latest novel is one of realism, which puts unreality into a real world. It can be criticized as retrogressive literary work as was my previous work, Norwegian Wood, but for me it represents a new challenge,” Murakami remarked.

This long novel centers on Tsukuru Tazaki as the main character who, during his high school days, was expelled from a group of four friends for no explained reason. He grows up with this dark history, but later looks back at those days and face the reality. At first, Murakami thought of putting this into a short novel of 50 pages or so, but later became interested in writing about Tazaki’s four friends, explaining, “As I wrote on, I wanted to write about those four and the story got longer. I wanted to write why the four severed their ties with Tsukuru. Sara, his girlfriend, spurs him to go talk to those four, and at the same time she was urging and guiding me to write along. It was a strange experience. But sometimes it happens.

“It is important for me to feel as if I’m being guided. The characters are guided, and so am I. Then we experience something and grow up to be strong. I hope those who read the book will experience the same.”

Asked if Murakami has ever been through the same sort of despair as is his character Tsukuru, he replied, “I have had a similar experience, but maybe not so bad as his. I understand roughly how deeply it hurts one’s feelings. When hurt badly, we want to hide ourselves and not be seen by anybody. We want to forget but can’t.

“Maybe it’s been embellished a bit, but Tsukuru’s ordeal is more or less the real thing. We feel anguish and try to put a lid on our emotions. But as time goes by, a lid opens up gradually and we mature and move to the next stage. We repeat this process in our lives to carry on. So this latest novel is a progression story. In order to see the progress at work, the damage should be bigger and the trauma should be deeper.”

As an avid runner, Murakami had taken part in the Boston Marathon six times in the past. He expressed his grief over April’s bombing incident in a message carried by the New Yorker magazine in its May 3 online edition. The article, entitled “Boston, from One Citizen of the World Who Calls Himself a Runner,” provides his advice for overcoming despondency.

“To overcome this kind of trauma takes time, during which we need to look ahead positively,” Murakami wrote. “Hiding the wounds, or searching for a dramatic cure, won’t lead to any real solution. Seeking revenge won’t bring relief, either. We need to remember the wounds, never turn our gaze away from the pain, and — honestly, conscientiously, quietly — accumulate our own histories. It may take time, but time is our ally.”

At the end of the session, Murakami replied to some of the more than 1,500 questions submitted to him, ranging from such topics as jogging, baseball, translation work and drinking beer.

One of the questions came from a female university student, who complained about the boring and childish behavior of the male students around her and wanted to know where she could find a decent guy. He replied, “I was like those kinds of students back then. I couldn’t make a funny joke or tell an interesting story. You can’t find the witty guy you dream of, so you might as well forget it.”

After the session, a 39-year-old man from Tokyo said excitedly, “I was impressed to see the real Murakami Haruki. His demeanor was more casual than I expected. He drinks alcohol and goes jogging — just like we do. Before he seemed remote but now I feel closer to him.”

“I haven’t read any of his titles yet,” a 40-year-old woman from Osaka remarked. “But I was interested in him as a person whose works of fiction have been acclaimed around the world. I thought his way of looking at things was profound and insightful. And because he reflects his views in his works, this made him popular around the world. Now I would like to read his works.”

All filming, recording and photography was banned from Murakami’s talk. But still in my memory, his attitude toward his calling as a novelist remains sharply defined. “The role of novelists is to give the public the best text possible,” Murakami emphasized. “Readers can take it as they want. If the author attempts to direct readers on how to understand it, then its value is greatly tarnished,” said Murakami, who concluded the event by saying, “I’m very happy to know people are waiting for my works. I also like those people who are angered by something I wrote because they didn’t find it to be the least bit interesting, but who say they will buy the next one anyway. It is completely okay for you to think of my work as boring.

“At the same time, I’m not saying my work is so good that you should read it. I do my writing as an individual. But one thing I want people to understand is that I never cut corners in my work. I wake up early in the morning and put my heart and soul into it. I am proud of never cutting corners. So even if you don’t find my work to be interesting, I’d like you to be aware that I never cut corners. Perhaps after a while you might feel it is not so bad after all. I will continue to do my best.”

Hayao Kawai was the first psychologist to introduce the sand play therapy concept in Japan. He believed sand play therapy was effective because Japanese frequently engage in non-verbal communication. The notion of the therapy is that allowing an individual to freely play with the sand and place objects or toys on the sandtray helps deal with their memories and obtain a firmer grasp of their own world.

Murakami’s works might be viewed in terms analogous to sandplay. There’s nothing strange about how the sand formations or toys placed around the sandtray by Murakami strike the right chord with some readers, and not with others. Likewise, being touched by them is not something to be forced upon others.

Outside the venue, some people waited patiently to catch a glimpse of Murakami. A student from Finland said she had been waiting for more than 90 minutes since she couldn’t get a ticket. It was her love of Murakami’s fiction, she said, that brought her to Japan. Baring the deepest inner roots of his soul gives Murakami’s writing the power to resonate across, and beneath, national boundaries to reach out to people around the world.

What Is Shakuhachi?: The Blue-eyed Shakuhachi Player Who Continues to Create New Musical Instruments