Japan's One of the Most Famous Camera Maker: Pentax

Pentax is the pioneer of compact SLR cameras.

The factory has been lost, but the technology remains.

The lenses of Asahi Kogaku are superior.

From now on, 35-millimeter film will become main stream.  Single-lens reflex cameras where lenses can be interchanged will be the norm.

The three of us can do it!

The first domestically produced SLR camera the Asahiflex I was completed.

A quick-return mirror mechanism was developed where the image in the viewfinder is captured when the shutter is activated.  The Asahiflex II B was born.

In this way, SLR cameras spread resulting in a camera boom.

Let’s use a prism and place the viewfinder behind it.

The Asahi Pentax (AP) was put on sale.

When the Asahi Pentax SP that had a built-in TTL light meter was put on sale, it gained popularity and became a long seller.

The bayonet type mount prevents misalignment of the electrical contacts.

The cameras of other companies are cumbersome and expensive.  Pentax cameras are compact and easy to use.

However, Pentax’s principle is to make compact, low-priced easy-to-use cameras that other companies cannot imitate.

Though having lagged behind other vendors, Pentax put on sale the world’s smallest (at that time) digital SLR camera the *ist D.

The K100D that had a built-in image stabilizer in its compact body was put on sale.  The high-performance K10D also went on sale.

The K10D shone with three crowns including the Camera Grand Prix.

Although Pentax merged with HOYA, new cameras continued to come out under the Pentax brand.  This year, the K-7 that can be said to represent the starting point of the Pentax style went on sale.

Pentax will continue to make cameras that anyone can easily use.

The K-x an epoch-making digital SLR camera that enabled 100 colors to be selected, which goes beyond the bounds of common sense, went on sale.  It became a big hit. 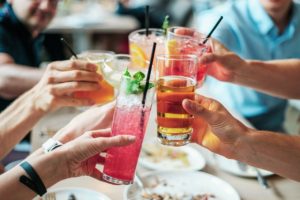 Why don’t you like to go out for a drink with your boss?