Blessed with abundant fish in Sagami Bay and water from the Hakone mountains, it is said that kamaboko (fish cake) was already being made in Odawara around 1558, which was an important commercial and transport site at that time.  This kamaboko later became the perfected Odawara kamaboko that we have today.  While observing this tradition and adhering to the original taste and production techniques of kamaboko, Suzuhiro has continuously been making innovations including the introduction of new ways of enjoying kamaboko such as a la Italian style.  So, let’s trace the history of kamaboko from its origin. 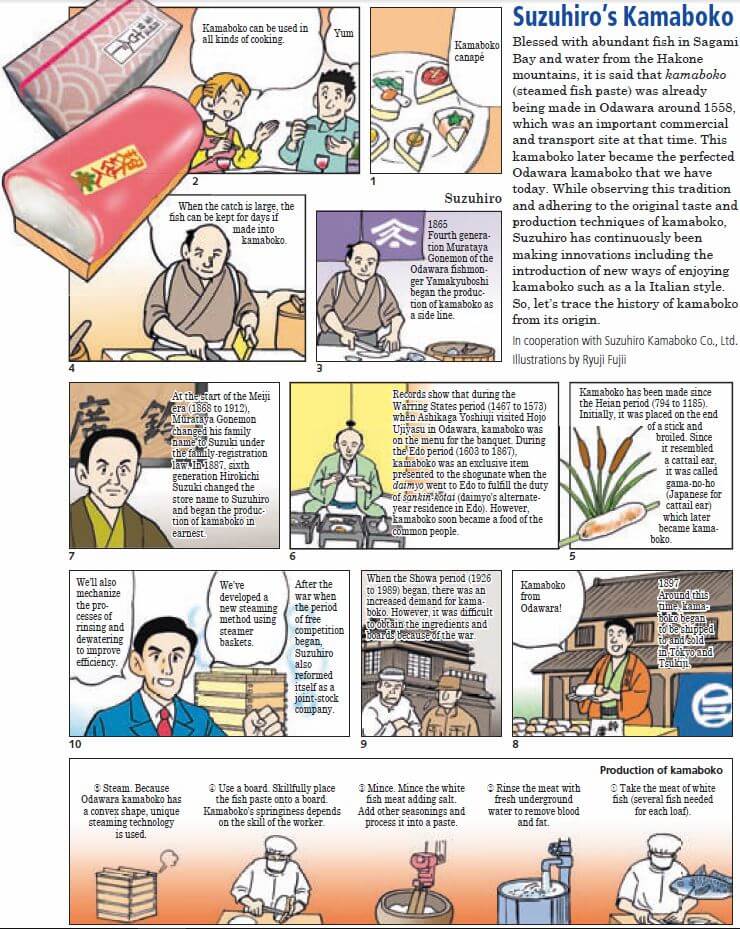 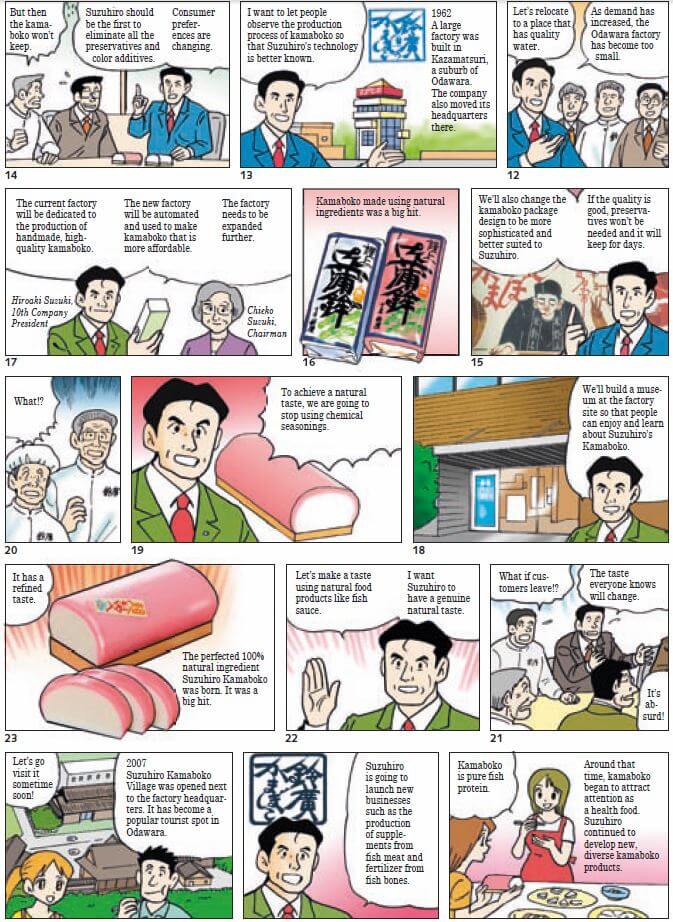 Kamaboko can be used in all kinds of cooking.

1865
Fourth generation Murataya Gonemon of the Odawara fishmonger Yamakyuboshi began the production of kamaboko as a side line.

When the catch is large, the fish can be kept for days if made into kamaboko.

Kamaboko has been made since the Heian period (794 to 1185). Initially, it was placed on the end of a stick and broiled. Since it resembled a cattail ear, it was called gama-no-ho (Japanese for cattail ear) which later became kamaboko.

Records show that during the Warring States period (1467 to 1573) when Ashikaga Yoshiuji visited Hojo Ujiyasu in Odawara, kamaboko was on the menu for the banquet. During the Edo period (1603 to 1867), kamaboko was an exclusive item presented to the shogunate when the daimyo went to Edo to fulfill the duty of sankin-kotai (daimyo’s alternate-year residence in Edo). However, kamaboko soon became a food of the common people.

At the start of the Meiji era (1868 to 1912), Murataya Gonemon changed his family name to Suzuki under the family-registration law. In 1887, sixth generation Hirokichi Suzuki changed the store name to Suzuhiro and began the production of kamaboko in earnest.

1897
Around this time, kamaboko began to be shipped to and sold in Tokyo and Tsukiji.

When the Showa period (1926 to 1989) began, there was an increased demand for kamaboko. However, it was difficult to obtain the ingredients and boards because of the war.

After the war when the period of free competition began, Suzuhiro also reformed itself as a joint-stock company.

We’ll also mechanize the processes of rinsing and dewatering to improve efficiency.

(1) Take the meat of white fish (several fish needed for each loaf).

(2) Rinse the meat with fresh underground water to remove blood and fat.

(3) Mince. Mince the white fish meat adding salt. Add other seasonings and process it into a paste.

(4) Use a board. Skillfully place the fish paste onto a board. Kamaboko’s springiness depends on the skill of the worker.

(5) Steam. Because Odawara kamaboko has a convex shape, unique steaming technology is used.

As demand has increased, the Odawara factory has become too small.

Let’s relocate to a place that has quality water.

1962
A large factory was built in Kazamatsuri, a suburb of Odawara. The company also moved its headquarters there.

I want to let people observe the production process of kamaboko so that Suzuhiro’s technology is better known.

The safety of food products has begun to be questioned.

Suzuhiro is going to eliminate preservatives and color additives.

Then our kamaboko won’t keep.

If the quality is good, preservatives won’t be needed and it’ll keep for days.

We’ll also change the kamaboko package design to one that is more sophisticated and better suited to Suzuhiro.

Kamaboko made using natural ingredients was a big hit.

The factory needs to be expanded further.

The new factory will be automated and used to make kamaboko that is affordable.

The current factory will be dedicated to the production of handmade, high-quality kamaboko.

We’ll build a museum at the factory site so that people can enjoy and learn about Suzuhiro’s Kamaboko.

To achieve a natural taste, we are going to stop the use of chemical seasonings.

What if customers leave!?

No. I want Suzuhiro to have a genuine natural taste.

The perfected 100% natural ingredient Suzuhiro Kamaboko was born. It was a big hit.

It has a refined taste.

Around that time, kamaboko began to attract attention as a health food. Suzuhiro continued to develop new, diverse kamaboko products.

Suzuhiro is going to launch new businesses such as the production of supplements from fish meat and fertilizer from fish bones.

2007
Suzuhiro Kamaboko Village was opened next to the factory headquarters. It has become a popular tourist spot in Odawara.

Decals for Four Types of Drivers in Japan