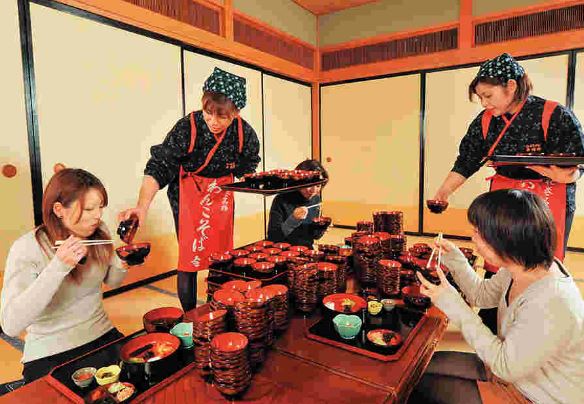 Wanko Soba, an Original of Eating Contests, Has Roots in a Feast for a Local Lord

Wanko Soba is a historic culinary specialty of Iwate Prefecture. It is a unique and entertaining way to enjoy buckwheat noodles. Every time you finish a bowl of noodles, a waitress standing over your table immediately fills up the empty bowl with noodles shouting encouragement to you like “Hai, don don!” and “Hai, mada mada!” Influenced by TV programs, many people associate Wanko Soba with an image of competitive or speed eating. In actuality, however, a variety of side dishes (such as nameko mushrooms with grated radish, fried minced chicken, and tuna) are served with the noodles.

The diners generally mix their favorite side dishes with the noodles and enjoy many bowlfuls at a fast tempo. Due to its merry atmosphere and image of competitive or speed eating, Wanko Soba is often considered to be a tradition among the common people. However, there is a theory that Wanko Soba has its roots in a feast made for an ancient local lord. About 400 years ago, the Lord of the Nambu Clan stopped over at the Hanamaki Castle on his way to Edo (today’s Tokyo). The castellan had his cooks make a feast for the Lord with locally produced soba and all sorts of delicacies. The Lord liked it very much. At dinner, only a small amount of noodles was served in a wooden bowl in a modest and elegant manner, but the Lord asked for another helping again and again. It is said that Wanko Soba is derived from this feast. Aside from this “out of the local lord”theory, there is another theory that Wanko Soba originated in a custom of treating people to soba, which began during the Edo period (1603-1867). To serve soba to a lot of guests, the host placed a small amount of noodles in each guest’s bowl and cooked more noodles while the guests were enjoying them. And when the guests emptied their bowls, the host refilled them with freshly cooked noodles. Some people say that this is the origin of Wanko Soba.

The people of that time could entertain a great number of guests in this way although they did not have large cooking pots. It is said that the amount of noodles that could be cooked in the pots used in those days was barely enough for 10 people. Being featured on TV programs and magazines repeatedly, Wanko Soba has become the number one specialty of Iwate Prefecture. A lot of people mention Wanko Soba as an attraction that they definitely want to try when they visit Iwate. In 2007, the 22nd annual All-Japan Wanko Soba Eating Contest was held in Morioka City. The highest record of this event is 559 bowls that was achieved in 1996 when a time limit had not yet been set. With a 15-minute time limit now being set, the record is 451 bowls that was achieved in 2000 (as of 2007). The Wanko Soba eating contests are held not only in Morioka but also in Hanamaki City in the same prefecture. In 2007, in addition, the Wanko Soba eating contests were held in the cities of New York and Hot Springs in the United States. Thus, Wanko Soba is now taking off out into the world.

Related article: Soba (What is the cultural aspect of Soba in Japan?)