Profession as a Gamer in Japan: Daigo Umehara 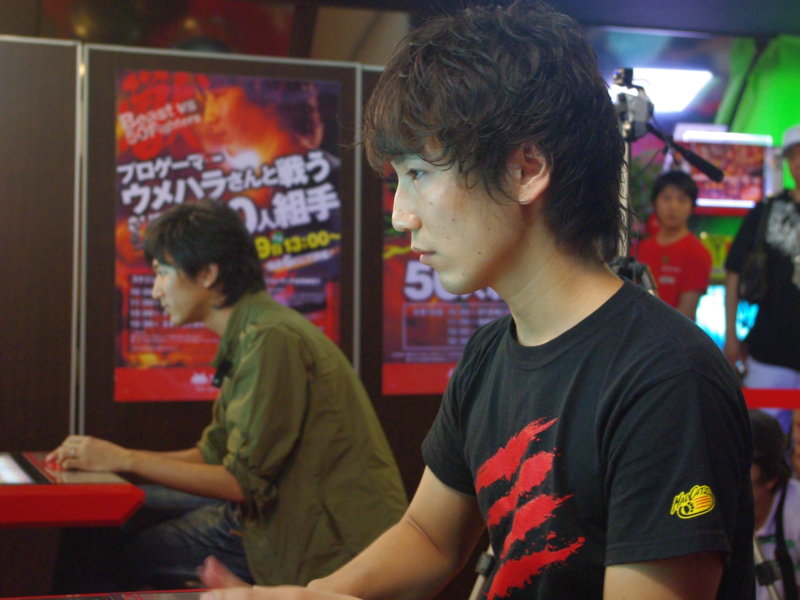 “Wait, you mean you thought you were winning?”  “Why don’t you try using your head a little next time?”  The trash talking screen character addresses you directly – this is what happens when you lose in the extremely popular one-on-one fighting game Street Fighter IV arcade version.

The day after the 2011 Tokyo Game Show, which had the greatest attendance of the past game shows with over 220,000 attendees, pro-gamer Daigo Umehara was featured in a gaming event where he was to face 50 sparring partners.  Among the young men and women that packed the eighth floor of the eight-story game center located near Shinjuku Station in Tokyo were families with babies in tow and even foreigners.  The crowd who packed the 150-person capacity space overflowed into the elevator lobby and stairways.  They came for various reasons – to see gaming at the professional level, because they wanted to play a pro, or because they were simply Umehara fans.

Umehara earns his living as a professional gamer, the first Japanese fighting game pro.  He has been active as a pro gamer for over 13 years since winning his first international tournament at age 17, and appears in the Guinness Book of World Records.  After signing a contract with US game peripherals maker MadCatz last April, Umehara has since appeared in many tournaments and events overseas earning both prize money and appearance fees.  He says himself he may well be the oldest pro gamer out there, and fully intends to keep at it until he turns 40 – “I want to keep going till I reach my limit, until I just can’t do it anymore.”

The event started in the afternoon but the numbered entry tickets ran out by that morning.  But only 35 people actually took part in the sparring.  A representative from event sponsor Taito guessed that “maybe they were leery of appearing on YouStream or when they found out about the media coverage.”  Even the last player in the event, who happened to be 2nd ranked nationally in Street Fighter IV, hurried off after the game almost embarrassed, without giving any interviews.

But all 35 of Umehara’s sparring partners were equally excited by the experience.  A 25-year-old male who came all the way from Hiroshima said with chagrin, “Maybe Umehara was nervous in the beginning because I seemed to be doing okay, but…”  A 22-year-old male who came from Osaka said he started playing Street Fighter IV after seeing Umehara in action looks back – “He is so far beyond…  I had no idea how to engage him.”  From Kanagawa, a 26-year-old male was astonished – “His attacks that were pretty normal in the beginning, but by the second round became extraordinary.  He seems to change his playing style every few seconds.”

“I try not to give myself weak spots.”

Among the 35 players, the only one to beat Umehara was a 22 year old male from Utah state in the US.  He said beaming, “Umehara is the strongest player in the world.  He’s famous in the US too.  I can’t believe I beat him.”  When this same player lost to Umehara in the exhibition match that followed the open sparring, he said, “Umehara’s strength is adaptability.  I can’t react as quickly as he can to attacks.”  Umehara himself when asked what lies behind his exceptional skill analyzes his play – “I try not to give myself weak spots.  I think it’s a matter of well-balanced attacks that are matched to the opponent.”

Cheers rose from the crowd every time a big attack landed.  Mixed in were the shrill voices of women.  According to Kenji Kojima who edits gaming magazine Arcadia, “Recently there have been more women spectators.  Not so many actually playing, but many who watch matches or become fans of pro gamers.”  The 20-year-old female who said she likes the way gamers’ hands move was not an Umehara fan but a fan of another player named Mago.  A 30-year-old woman says Umehara is “cute, and it’s fun just to watch him play.”  She started playing herself just 4 months ago.  Umehara himself says, “It was unimaginable to have female fans when I was a kid.  Lately it seems one in ten is a woman.”

Not only does Umehara attract the ladies, he gives inspiration to young men.  An urban youth of age 18 speaks with respect – “He is super cool, and it’s great that he can make a living at something he really likes to do,” something the youth aspires to as well.  Umehara has a sense of his social responsibility too – “I feel like I have to convey to these young people that think they would like to have my lifestyle, that there is actually a career in it.”

In Korea, Taiwan, the US and Europe, this type of gaming is called Electronic Sports (e-sports) and is treated as a competitive sport just like soccer or chess.  “In Japan however where a culture of “gaming=sport” did not develop, although there were game tournaments sponsored by game software makers that awarded various titles, the only e-sports type tournaments were small in scale and Japan was seen as a backward nation in that aspect,” according to the website of the Japan E-Sports Society founded in 2009.  While there are apparently more than 400 pro gamers in Korea, in Japan that number is still in the single digits.  Umehara has been invited to Kuwait this October, and says he traveled overseas 11 times last year, which speaks to the great activity in e-sports outside of Japan.

Recently, there has been a move to tighten regulations in China.

There are negative images associated with gaming, such as “addictive” and “hikikomori” or “housebound, agoraphobic.”  In August 2005 there was an incident in Korea where someone died after playing online games in an Internet café for 50 consecutive hours.  China has special rehab centers for youth who are excessively addicted to online gaming or chat rooms.  This has led to an increased number of countries that regulate the age of or hours spent by people in Internet cafes. The Chinese government recently published a new regulation limiting online gaming by minors under the age of 18 to three hours per week.

On the other hand, since electronic sports require a controller that is manipulated using just the fingers, disabled persons are also able to participate in the sport as players.  Others see promise in use of electronic games in rehabilitation and therapy in public health and medicine.

Practicing for an average of six hours a day

Looking back on this past event, Umehara who practices for an average of six hours a day says happily, “This was the biggest event so far for me in Japan.  I was glad so many people came and were so enthusiastic.  It was a valuable experience.”  Event sponsor Taito PR representative Itsuko Sasaki was delighted, saying “We want to do more events like this. I wanted to give it a try myself.”  While it was social networking games that grabbed the spotlight at this year’s Tokyo Game Show, pro gamers active in an old school fighting game genre brought the real fresh air to Japan.

The Attraction of Electronic Sports

Electronic sports is the name adopted for multiple player video gaming as a competitive sport, commonly abbreviated as e-sports.

Genres in e-sports include first person shooter games (FPS), real time strategy (RTS), racing games, sports games and the fighting games that Umehara specializes in.  A variety of large scale tournaments exist, but the World Cyber Games is one of the most respected international e-sports tournament with a large purse of 285,000 dollars (in 2020).

In the fighting game genre, the Evolution Championship Series stand out as the largest fighting game tournament in the world. Umehara, who won the championship in 2008 and 2009, became widely known through this tournament. According to an event attendee in his 30s, “It is a lot more interesting to play a person than a computer. Your opponent improves and develops, and his strengths can change as his mood changes. Those changes are what make it interesting.”