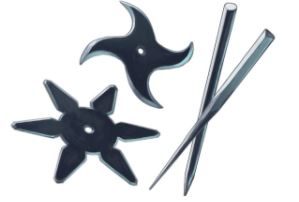 Shurikens are often associated with “ninja weapons,” but in fact they were often used to distract enemies and escape by striking at them while fleeing, rather than for the purpose of attacking them. The name “shuriken” is also said to have been given during Muromachi period (around 14th century) meaning “a sword that is hidden inside the back of the hand.” Shu means hand, ri means back, and ken means sword. In some cases, the blade of the shuriken was coated with poison to increase its killing power. Hence they were also widely used as weapons to assassinate important people by the ninja.

Therefore, shurikenjutsu (shuriken skill) was more of an assassination technique and not a martial art like swordsmanship.