What Is the Image About Japan?

Mention a country’s name and I bet stereotypes come to mind. When I ask Japanese friends what they think of my native Australia, they think “lots of space” followed by koalas and usually the thought that I must love beer. Try it yourself. Think of another country and we instantly get stereotype pictures in our heads. So what do people around the world think of when they consider Japan?

What Is Japan Alike?

Earlier this year, this column outlined the results of a global McCann Truth Central study called “the Truth about Wellness.” We asked nearly 11,000 people across nine countries about their thoughts concerning all aspects of wellness. We got a huge range of views. And some that were quite consistent. Perhaps the strongest example of the later was when we asked “which country do you think has the most wellness?”

In every country Japan was the number one choice, or a close number two. It may not be surprising that Japanese people also rated their own country by far the leader in terms of wellness. But why did people in most other markets think Japan was more well than their own or any other? Three words came to mind, and perhaps symbolized a bigger insight into the way people see Japan: sushi, zen and TOTO.

And probably just like the editor of Japan Close-Up, when we explained this to him your reaction might be a mix of “huh” and “oh yeah, I get it.”

But what do they really mean?

Of course sushi is known and increasingly popular world over. It has gained an incredible global following as a “great, delicious, healthy” food. The cuisine of Japan is highly rated everywhere and sushi is seen as its highest point. And despite the reality that curry rice maybe the most popular lunch in Japan, and that the metabo trend of the last few years is just a symptom of many Japanese people being increasingly concerned about a deterioration in diet and health, there is a perhaps misconception globally that Japanese diets are eternally the healthiest. In simple terms as one person in India said the reason Japanese people live the longest is because they eat the healthiest.

Japan is also seen as a deeply spiritual country. Hence zen. Often deeply misunderstood by foreigners -- there is a belief that the quiet, non-intrusive nature of the Japanese personality is because of a religious background. Now remember that often when we asked people across all countries about spirituality it was often confused with religiousness. Is Japan deeply religious? Certainly not in the sense that say America is a country with an extremely high level of regular religious service attendance. When foreigners told us they thought of zen and Japan they were really saying that they found Japanese people calm, and seemingly at peace with life.

And TOTO? Well actually that should be TOTO. Yes the toilets. Now it was not that people around the world think that Japanese people are toilet fixated. However the famous computerized toilets of Japan are a globally recognized symbol of Japan’s high level of cleanliness, of a belief that Japanese people take a serious and detailed attitude to all aspects of health and that Japan is the most advanced technological country in the world. The “toilet with a computer panel beside it” is an enduring image that visitors take away and that many people around the world see as one of the things that makes Japan unique.

See and Think of Japan Deeply

Now many readers will be thinking that this all seems a little arbitrary and maybe not a real reflection of Japan. Those of us that know Japan better will be thinking that while all three of the above are to some extent true, they offer a limited view of Japanese reality. After all, most people cannot afford sushi every day, and choose to eat maybe less healthy diets. While zen and Buddhist cultural backgrounds play a part in the Japanese personality, the truth is it is really far from a “calm” culture. People are tense, the levels of mental stress are extremely high and people are really worried about life for a whole range of reasons that the economic and natural disasters of recent years have only accentuated. And to be honest, while TOTO is the leading toilet manufacturer, it’s not like most houses have the latest versions.

However, look a little deeper and we can see that in fact those three terms are really symbolic of traits that do apply to Japan. In the same research, when we asked Japanese people why they firmly believed that their own country and culture was the most “well” they quoted diet, self-awareness and the use of technology. What they meant was that they believe that the Japanese diet is more balanced than many. Even with the encroachment of Western foods there is a common belief in Japan that wellness comes from carefully balanced meals and eating fresh food. A habit embedded still in the attitude mothers take to feeding their family. Think about the child’s bento box and the pressure the mother is under to provide a carefully homemade one every day.

And then there is technology. It’s true that people all over the world believe Japan is the most technology advanced country and lifestyle. Whether that is actually true may be debated. But our own research would indicate a common belief. Three years ago when we asked 500 marketing executives around the globe which city they believed the next great transformative ideas in products and technology would come from the top two answers by a wide margin were Tokyo and “silicon valley.” This was at a time when the Steve Jobs Apple worship was at its peak. This year we reached out to over a thousand people across a dozen countries and asked “which country in Asia do you believe innovation will come from in the future?” As you can see Japan was the clear favorite.

All of this also reminds me of another piece of research. Over the last nine years, we have undertaken six rounds of a national survey in Japan on how people feel about the country. Among other things we give them a list of attributes and ask which they think defines the country. What is interesting is that across all ages in each survey two attributes far out rank others and are equally balanced: “Tradition” and “Technology leadership.” We have found that Japanese people themselves also believe they have a unique mix of maintaining high standards of cultural uniqueness while embracing and encouraging leading edge innovation in all aspects of life. Which is a long way of saying that perhaps what might seem like three odd terms to describe Japan are actually more accurate than one’s first impression. 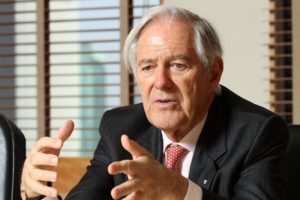