Mochi and Its History in Japan 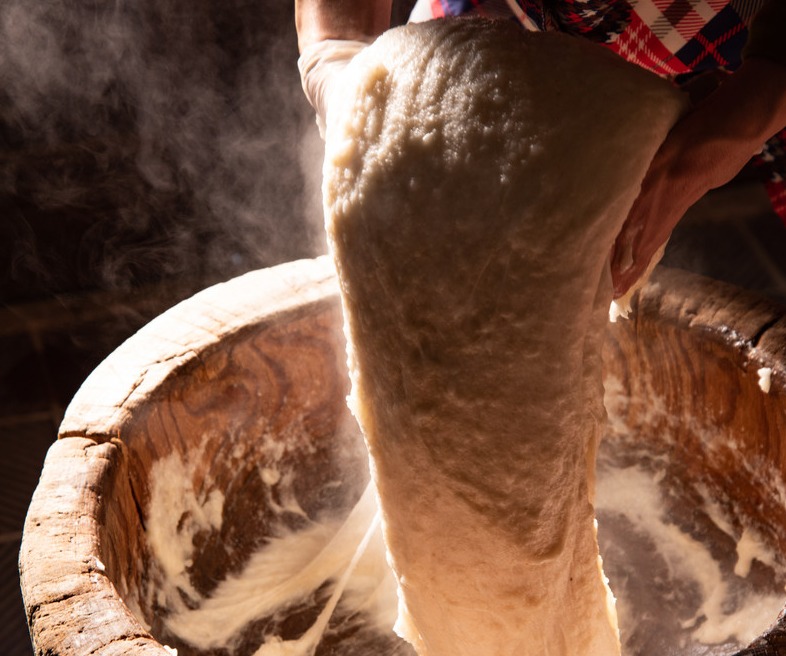 The Roots of Mochi Are in Rice Balls

When you hear the word mochi, you probably have the image of sticky rice cake made by pounding steamed rice with a pestle in a mortar, where the pounded rice is pulled into small pieces and rolled into balls.  However, this was not always the case.  Mochi was originally made by hand rolling or kneading rice rather than pounding it.  According to Kiyoyuki Higuchi, the author of “Taberu Nihon-shi (A History of Japanese Diet: Food Changed History)” (Shibata Shoten), the roots of mochi are in rice balls.

Most people probably feel that rice balls and mochi are two totally different things.  In fact, however, both foods used to be similarly appreciated as handy foods that could be easily transported.  From ancient times, to make it easier to eat unpolished rice that had a tendency to crumble into pieces or to preserve the rice longer, the unpolished rice was made into rice balls.  This portable food that was easy to carry around was called mochi-ii.

When these rice balls were firmly kneaded until the rice grains were no longer intact, they became a keepable food.  This was and is mochi.    At that time, mochi was made by firmly kneading and compressing rice balls.  It was effectively used as a foodstuff that was both convenient to store and transport.

The above mentioned mochi-ii thus became the origin of the word mochi.

As this history relates, we can see in the literary works of the Nara Period (710 to 794) and Heian Period (794 to 1185) that mochi was called mochi-hi in those days, which was derived from mochi-ii.  It was only later in the Muromachi Period (1333 to 1573) that the word finally became simply mochi.

In addition to being a practical preserved food, mochi was also used as a ceremonial food eaten on special occasions or Hare no Hi (literally, special day).

As represented by kagami-mochi (round mirror-shaped rice cakes) displayed during the New Year, mochi was valued as an offering to the gods.  In the background of this, there were the religious belief held toward rice plants and the hopes and prayers for an abundant harvest.

In other words, mochi was a sacred food used as an offering to the gods while also being a convenient foodstuff used in everyday life.