Miso Soup and Its History, the most popular soup in Japan

Miso Soup, the most popular soup in Japan 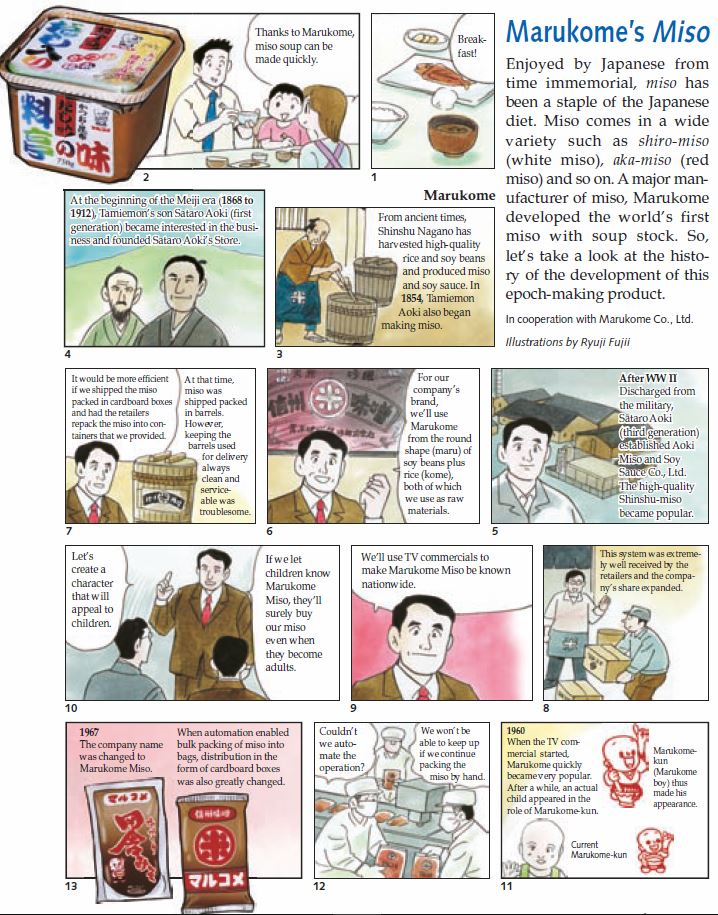 It would be more efficient if we shipped the miso packed in cardboard boxes and had the retailers transfer the miso into containers that we provided.

When commercial television started, Marukome quickly began showing animated commercials, which enjoyed popularity.  After a while, an actual child appeared in the role of Marukome-kun.

Couldn’t we automate the operation?

The company name was changed to Marukome Miso.

Upon further inquiry, people seem to be using the miso without preparing soup stock.

A customer questionnaire indicates that lots of people feel that having to make soup stock is a nuisance.

We need a new cooling device.

A rapid heating and cooling device that solved the problems was developed.  The first Miso with Soup Stock “Ryotei no Aji (high-class Japanese restaurant taste)” went on sale.

The Miasa Kogen warehouse in Nagano Prefecture was completed.  Smooth, naturally brewed miso that was allowed to mature over a long period of time was produced at this warehouse.  This miso was mainly sold via mail order.

I wonder if I could buy it at a general store.

The liquid miso was newly put on sale as “Eki Miso” (liquid miso).

It’s easy to use.

The popularity of this epoch-making Eki Miso exceeded all expectations.  More than a million bottles were sold within the first three months.

I’ll leave it up to you.

What it takes to be a good company in Japan?