Monjayaki and Its History

Monjayaki is mostly eaten in the Kanto region where Tokyo is situated.  Of the monjayaki, the most well known is probably the monjayaki in the Tsukishima district of Tokyo’s shitamachi (traditional shopping and entertaining district). (See its official Tsukishima Monja website)

In Tokyo, monjayaki used to be sold in cheap candy stores.  Transportation facilities to Tsukishima were poor until a subway was opened in 1988.  Thanks to this isolation, monjayaki as part of the old culture of cheap candy stores, which was disappearing in other districts, remained developing independently.

The monjayaki that is currently eaten is made by frying on a hot plate a mixture of flour and water in which various ingredients such as cabbage, squid and agedama (bits of deep-fried tempura batter) are added.  It is said that the former monjayaki sold in the cheap candy stores did not contain any vegetables or other such ingredients.

In one of the sketches in Katsushika Hokusai’s Hokusai Manga (Hokusai’s Sketches), there is a figure of a monjiyaki seller.  The birth of monjiyaki is therefore thought to be in the latter part of the Edo period (1603 to 1867) at the latest.

Monjiyaki is prepared by adding sugar to wheat flour dissolved in water to form a somewhat runny mixture.  The mixture is then placed on a hot plate where it is formed into a character or design and fried.  Monjiyaki is the same as monjayaki in terms of basic ingredients, etc.

Even more than its taste, the process of frying monjiyaki captured children because it was a sort of performance.  Moreover, it is said that monjiyaki fried in the shapes of fish or other designs were hung out in front of stalls as a way to attract customers.

Hot plates were later installed inside the cheap candy stores and other shops so that monjiiyaki could be prepared and eaten in the store.  Monjiyaki became an afternoon snack for children.

According to Kosaku Ishibashi’s Dagashi Fudoki (Cheap Sweets’ Culture and Geography; published by Seika Jikken-sha), the monjiyaki stalls at the beginning of the Meiji era (1868 to 1912) had a circular hot plate around which the children would gather.  The stall owner would provide the children with the monjiyaki mixture, which they would then pour out onto the hot plate.  When cooked, the children would use something like a rice scoop to scoop up as much as they liked and eat it.

It is also said that if by chance some of the monjiyaki flowed into the cooking area of another child, it would become part of that child’s monjiyaki.  The children were therefore very serious when pouring out the monjiyaki mixture. 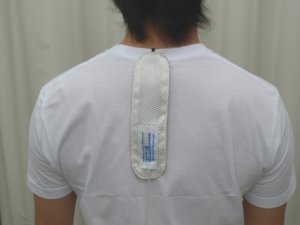 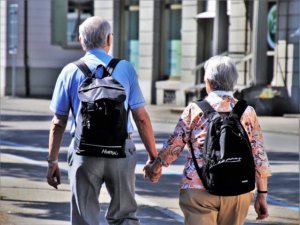 What do you worry about most when thinking about nursing your elderly parents?