Manga is not only for kids but adults in Japan 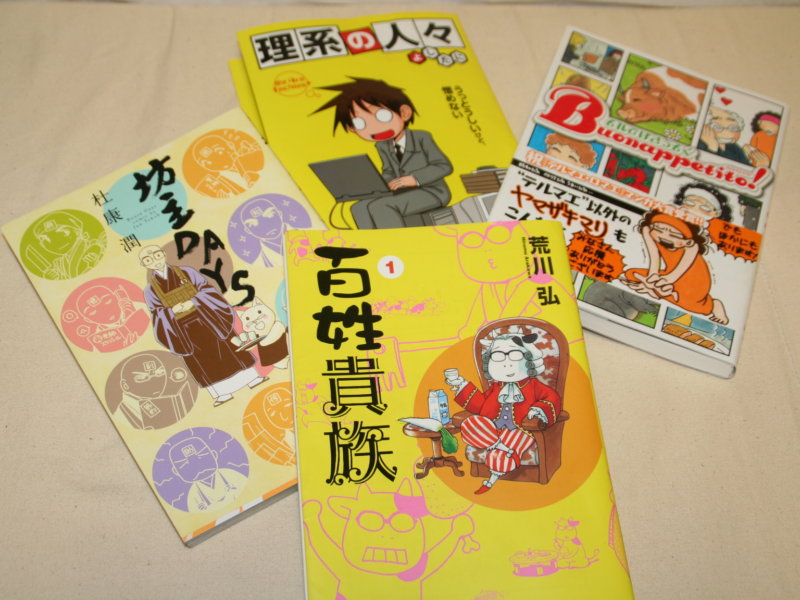 Scattered around my living room bookshelf, my bathroom and even on my dining table are essay collections about life on a dairy farm in Hokkaido, being a poor but well-fed student in Italy and the awkward social skills of “technie” engineers. Comical, heartwarming and sometimes provocative essays about unique experiences are written in most languages. But capturing these episodes in manga form perhaps is only done in Japan.

Even in Japan, using manga as an outlet to relate personal experiences is a fairly new development. In the 1990s, “mook” (magazine + book) became popular. Mooks covered a specific trend and filled with photos and illustrations like a magazine. Yet they had the shelf life of books. Relaying humorous experience and information in manga form became a standard section of mooks.

One major contributor to popularizing the essay manga style is Rieko Saibara, a manga artist whose eccentric life was far more entertaining than any fiction she conjured up. Saibara, 46, grew up poor in Kochi Prefecture, had a divorced irresponsible mother. But she and her siblings managed to survive and have fun in doing so. Her childhood is documented in prestigious Bungei Shunju award-winning “Bokunchi” manga

As an adult, Saibara continued her eccentric life, documenting her gambling losses from pachinko and mah-jong in manga form. Later in life, she would marry and divorce an alcoholic photographer. He fathered her two children before dying of cancer. She is now raising them as a single mother. The work that most people can relate to is her parental struggles and triumphs and her manga Mainichi Kaasan (Everyday mom) turned into a prime-time television animation in 2009.

Typically, essay manga writers fall into two groups: one group is already well-established manga artists and the other group is unknowns who managed to garner an on-line following of their blogs. “Boku, Otariman” (otaku + salaryman) is a 2007 hit manga about the social awkwardness of a geeky systems engineer that originated in blogosphere. Writing under the pen name Yoshitani, the author insisted that the book be placed in the “business” section because he felt others could learn business social skills from reading about his mistakes.

As a format, many essay manga contain trivial information and facts about the topic covered. Looking at my husband’s collection, there is “Buono Appetito” which chronicles the life of author Mari Yamazaki as a poor student in Italy and includes 17 recipes of Italian favorites. “Bouzu Days” (Monk Days) is about the training of the author’s brother as the head monk of a major Buddhist temple. It gives information about everything from the foods eaten to summarizing the beliefs of various sects. But my favorite is “Hyakusho Kizoku” (Royal Farmers) about life growing up on a cattle ranch in northern Hokkaido.

Written by Hiromu Arakawa of “Full Metal Alchemist” fame, it departs from the steampunk fantasy of her major work. Her essay manga conveys trivia facts about farming life. In the manga, Arakawa, and her family of dairy and potato farmers, are depicted as cows. The interaction between the cow-shaped Hiromu and the human editor who tries to turn the stories about cows into “pet essays” genre is hilarious and cute. When she relates information about farming techniques, the cow dresses like a professor and lectures from a podium. My favorite story is about how salmons are washed up on farms after a flood. While farmers are not permitted to fish for salmon in the rivers, they own the right to eat if the fish is trespassing on their property. Japanese essay manga are definitely not just simplified essays. The stories of Rieko Saibara tending to her troubled, dying husband are heartbreaking. Many people, including myself, would shy away from prose about cancer. Yet because it is a manga, “Mainichi Kaasan” captures the sadness and the power of love in a way that is accessible to ordinary people. They are entertaining, informative and thought-provoking. I wonder just how long it will take before this genre is popular worldwide.