It is said that vinegar is the oldest flavoring created by human beings.  It was brought to Japan from China during the period of Emperor Ojin (360 to 404).  More than 200 years ago, Mizkan succeeded in producing vinegar using the lees of sake (rice wine) for the first time in the world.  After that, Mizkan steadily grew so much so that it even became synonymous with vinegar.  While continuing to pursue consumers’ needs, Mizkan developed in 1964 Ajipon, a sauce that has become indispensable for nabe (one-pot dishes).  So, what is the secret of this epoch making product?

Not only with nabe, Ajipon also goes really well with salad and fried food.  It goes with almost anything.

Middle of the Edo period

Now that government regulations have been removed, sake can be produced anywhere.  Handa’s sake used to be protected under government control, but it’s going to have a hard time from now on.

Matazaemon had had a problem with disposing of the large amount of lees produced in the process of sake brewing.

They say that someone in the neighboring town has made mirin (sweet sake) using sake lees.  I wonder if we could make something out of them.

Hmm.  Vinegar has been used from the age of Manyoshu (Anthology of Myriad Leaves).   They say vinegar production is prospering in Osaka.   This vinegar is made from rice just like sake is made from rice.   It must also be possible to make vinegar from sake lees.

To make vinegar using sake lees, water and vinegar are added to the lees to ferment them with acetic acid while making use of the alcohol in the lees.  It is said the lees of about three years old produce the best taste.

I didn’t expect the vinegar would be this successful.

Boss, I’ve heard that a dish called sushi that uses vinegar is becoming popular in Edo.

It is said that sushi shops began to appear in the town of Edo around 1687.  But this sushi was so-called nare-zushi, fermented fish, where only the fish was eaten.  It was around 1752 that hannare-zushi appeared where you could enjoy both the fish and rice.

So, this is sushi.  It sure tastes good.

This vinegar is Izumi Vinegar from Osaka.  These rice vinegars are very expensive because it takes a lot of work and a long time to produce them.

Our vinegar has a nice flavor and can be produced in a shorter time at a lower cost.

Our vinegar can beat Izumi Vinegar.

When it was used to make sushi rice, Matazaemon’s vinegar gave the rice a yellow tint as well as a flavor.  The vinegar instantly won popularity.  When haya-zushi (present-day nigiri-zushi) appeared around 1825, the demand for this inexpensive, quality Matazaemon vinegar further increased.

Second generation Matazaemon Nakano referred to himself as Kanjiro Suya because he was engaged in full-fledged vinegar production.  He used Marukan as a trademark.   However, other vinegar manufacturers also began to use Marukan.  Marukan became to generally indicate vinegar manufacturers in Owari.

Forth generation Matazaemon Nakano who studied the art of divination started a new business.

The characters 中野(Nakano) are unstable.  Let’s use symmetrical characters中埜 (Nakano) instead.  We’ll start beer brewing to toughen up our brewing business.

In 1884, trademark regulations were issued and companies were required to register their trademarks.  A major vinegar manufacturer in Nagoya quickly registered Marukan as its trademark.

I’ll create a new trademark by following the art of divination.

The family crest of the Nakano family is ㊂.  “三 (3)” is a lucky number and “○” indicates “one whole world.”   We’ll use Mizkan which is superior to Marukan.

Mizkan had come through turbulent times.  But when cheap synthetic vinegar hit the market after the war, the sales of brewed vinegar dropped.

Our conventional system is too expensive.   We’ll streamline our operations and introduce a new manufacturing system so that we can produce good brewed vinegar at a low cost.

We’ll also start production of rice vinegar which is in high demand.

Vinegar used to be barreled and distributed through wholesale dealers.  But when supermarkets appeared in the 1950s, it began to be bottled and sold to individuals.

Until the 1950s, vinegar was sold at liquor stores by measure taken out of the barrel using a funnel.

At supermarkets, consumers freely choose what they want to buy.  We have to develop new products to deal with this situation.  We won’t be able to survive otherwise.

Around that time, people in the Kansai region often used citrus fruits and soy sauce as condiments for nabe.  Ponzu was therefore well received.

The element pon of the name ponzu is said to be derived from pons or punch, a European appetizer.  It was then combined with su (vinegar in Japanese) to indicate a flavoring containing vinegar.

Ponzu is mostly used together with soy sauce.  It would be more convenient if they were combined in the first place.

In response to this voice, Mizkan studied the sauces of fancy restaurants and released Ajipon (which means aji-tsuke (flavored) ponzu) in 1964.

To spread Ajipon throughout the country, we’ll have to encourage the Kanto people to eat more mizutaki.

Mizkan began demonstration sales of Ajipon by bringing in pots and cooking mizutaki at the sites of food markets in the Kanto region.  They also held tasting events at department stores and supermarkets repeatedly.

As a result of their efforts in sales and the effect of commercials, more and more people began using Ajipon for their nabe.  The sales of Ajipon also increased in the Kanto region.

Mizkan then received information from consumers that they used Ajipon also for other dishes than nabe.   When the company introduced this in their ads, Ajipon that had been sold mainly in winter grew into a product that could sell throughout the year.

It goes with salad, yakiniku (grilled meat), Chinese dishes, and everything else!

Ajipon is a rare product for which its users have paved a new path. 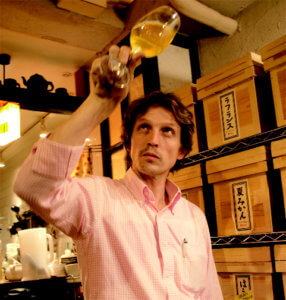 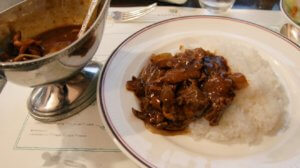