I can hear the sound of charumera (type of flute) from a ramen (noodle) stand.  Crows are cawing in the evening sky.  Is it nearly time for dinner?  From nearby, the fragrant aroma of soy sauce tickles my nose.  By simply strolling in an area filled with such a nostalgic air, I feel freed from my busy daily life.  Here, in the Shin-Yokohama Ramen Museum, nine ramen shops selected from throughout the country have been set up in a row.  The museum also sells nostalgic toys and cheap sweets that we enjoyed as children.

Opened in 1994 at the North Exit of Shin-Yokohama Station, this establishment has become the first successful model of a food theme park that gathered together carefully selected well-known shops.  The interior of the establishment is decorated in line with its theme of “Showa 30s (1955 to 1965)” and its unique atmosphere which cannot be found in normal ramen shops is the reason why it’s called a theme park.

“How nice with its retro atmosphere,’” said a housewife in her fifties expressing her feelings openly.  She said that it was her first visit to the museum and she was thrilled with its nostalgic atmosphere.  “I come here at least once a week to have my favorite ramen,” said a man in his 60s who had purchased a year pass which costs 800 yen ($10).  He also said, “I never get tired of this place because they hold street performances and other events all the time.”

From the year 2000, food theme parks have spread throughout the country offering a diverse range of foods such as ramen, gyoza (pot stickers), custard pudding, bread, donburi (rice bowl dishes) and sushi.  Normally, the shops within the theme parks are replaced often.  Besides being removed by the tenant, a shop can also be removed based on popular vote.

Tokyo Meatrea opened in Tokyo in December 2009.  It offers an assembly of restaurants from across Japan known for their meat dishes.

<Other Major Food Theme Parks in the Country>

Ikebukuro Gyoza Stadium (Tokyo):  Well-known gyoza from around the country 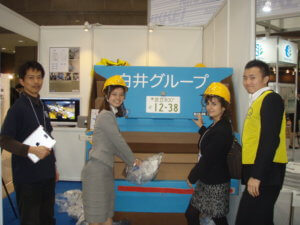