Every year three million people die of dehydration according to the study by WHO (the World Health Organization).  In developing nations the secure supply of safe drinking water is still a matter of urgency in the 21st century.  A small business in Kanagawa Prefecture is getting ready to start manufacturing in Bangladesh of a device that uses a bicycle pedal action to purify water, and which will also contribute to local job-creation.

The Cycloclean developed by Nippon Basic Co. is a bicycle-based purification device and is very easy to use.  The bicycle can be pedaled to where the water is located, the river or lake, or standing pool of water.  The hose is lowered into the water, and then all one does is to pedal.  The revolutions of the wheels work to pump the water up, passing it through four purifying filters.  About five liters of water can be purified in one minute.

According to CEO Yuichi Katsuura, Nippon Basic started selling the Cycloclean in Japan in 2005 for a price of 550,000 yen ($6,875), and has sold a total of about 200 units in Japan and elsewhere since then.  In Japan it is mostly local municipal government groups that have purchased the Cycloclean for emergency purposes, and the 40-50 units that are being used overseas were mostly donated to Southeast Asian areas by Japanese NPOs or NGOs.  In Myanmar, farming villages and hospitals were pleased to receive them after damage suffered from cyclones in 2009.  In Japan after the Great East Japan Earthquake of 3-11 last year the company fielded about 200 inquiries from places like schools and condos in addition to the disaster areas.

Currently the company is working to encourage use of the Cycloclean in Bangladesh.  About eight million bicycle-powered rickshaws or pedicabs are on the street today in Bangladesh, with about two million of those operating in capital city Dhaka.  Together with economic development comes the spread of the automobile and motorbike, and pedicab traffic jams are becoming a serious problem.  And securing safe drinking water is another matter of great urgency.

Cycloclean Can Be “Killing Two Birds with One Stone”

The governmen is attempting to reduce the number of pedicabs and have the pedicab operators turn to some other type of work.  One of the options for new work would be a “water business” using the Cycloclean.  Katsuura says, “There are people who sell river water by the bucket.  If they used the Cycloclean, they could easily make water that was cheaper than buying water in PET bottles, and cleaner than the river water.”  Centering efforts in Dhaka, the company plans to have the old pedicab drivers use Cycloclean bicycles to make drinking water, which they would sell for 1 taka per liter (about 1.3 yen). The idea came from the hope that people who have lost their livelihood as pedicab drivers will be able to make the transition to this new job quickly since they will still be pedaling for a living.  The Cycloclean will provide safe drinking water and new jobs.  If it works, it will be like killing two birds with one stone.

Last year JICA (the Japan International Cooperation Agency) determined this experimental employment plan to be a promising new business and allotted 50 million yen ($625,000) for further study.  Katsuura has been in Bangladesh since mid-January this year working to get the business started. At the same time, currently as he is building this new business model, Katsuura is working on preparations for mass production of the Cycloclean.  He says, “There isn’t clean water in some developing nations, and many children are losing their lives. It is a real grassroots effort, but I hope we can help in even a small way.”  Local production started last spring in Bangladesh, with just the filters being made in Japan because of safety reasons, and they aim to make 100-200 units a year.  Nippon Basic is also working towards the manufacture of a device that will desalinate seawater and a water purification device that can fit into a carry-on size case with casters. 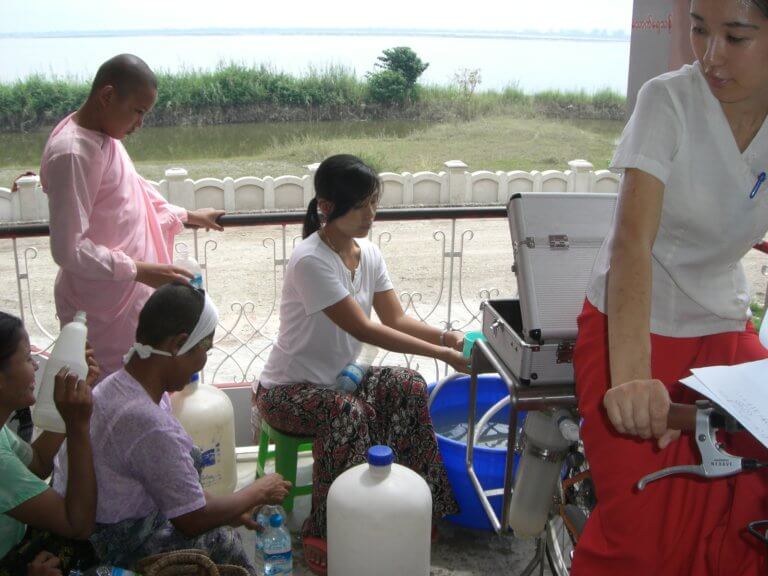 Charity hospital in the outskirts of Myanmar’s Mandalay 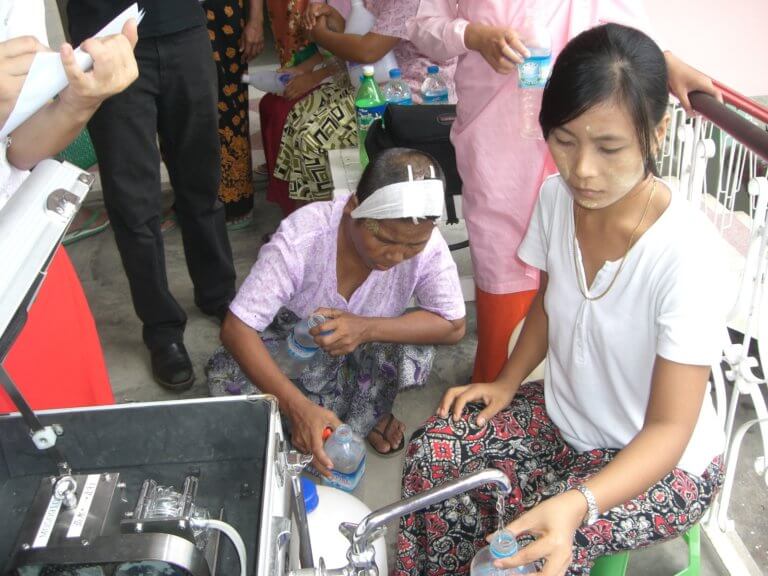 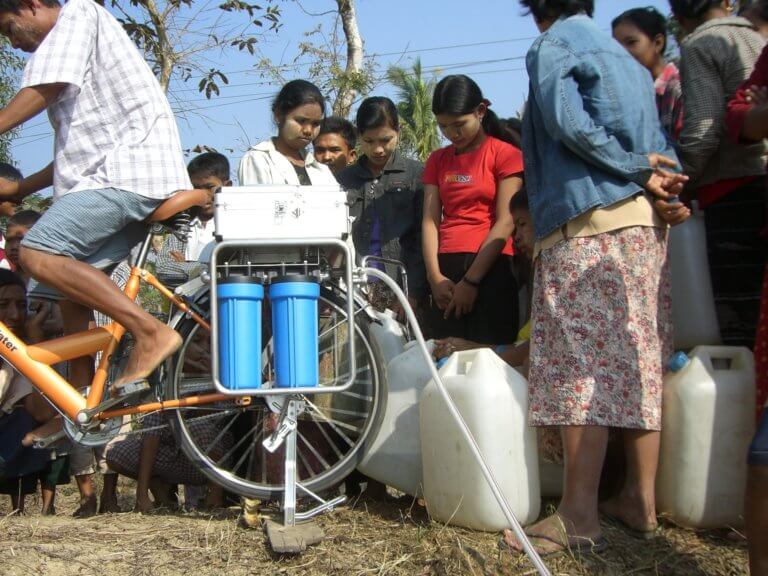 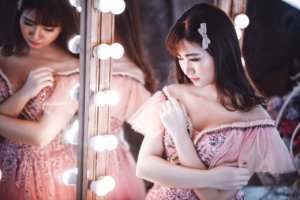