Why hasn't telecommuting taken root in Japan, even in the midst of a pandemic? Here is an answer.

For the American coming to work at, or even visiting, a traditional Japanese office, it’s a shock.  Rather than the individual offices or cubicles that are typical of American offices, in a traditional Japanese office layout there are no walls between desks.  Desks are pushed close together, so that each section forms a shima (island). The desks are turned to face each other, and the desk of the head of the section is at the end, so that it appears that the whole group is sitting down to a formal dinner party.

The spatial preferences of Japanese and Americans closely reflect our preferred working styles.  Accustomed to individual offices or cubicles, Americans tend to dislike Japanese style open offices because there are a lot of visual and audio distractions.  There is also a lack of privacy, making confidential discussions or personal phone calls difficult.  This reflects our working style of working independently on our own projects, using a lot of concentration in order to be efficient.   (This is the same working style that makes telecommuting popular in the U.S., and leads to the plethora of laptop ads in American magazines touting the ability to “work from anywhere.”)

Meanwhile, Japanese tend to dislike American-style offices, feeling that the walls prevent close communication.  Japanese like being able to see and hear their co-workers, to be able to sense what is going on in their workgroup.  They like being able to consult with colleagues and their supervisor without getting up from their desks.  In fact, a group meeting can be held quickly and efficiently without having to repair to a conference room.

The Reason of Open Office in Japan

Another reason for the typical Japanese office layout is that Japanese managers tend to like to be able to see their subordinates, in order to observe directly their work habits.  This preference results from the Japanese work-style which emphasizes group collaboration and information sharing, including the expectation of daily horenso (reporting, contacting, and consultation) concerning current work projects with one’s manager.  Also, for Japanese who are oriented toward group interaction, being seated in a group is comfortable because it promotes a family-like feeling among the work team.  Japanese managers tend to relish their role as “father” of the group.  In fact, when I was working in Japan, our shima had a phone on every desk, but they could only be used for incoming calls or interoffice calls.  The shima had only one outside line, which came through my boss’s phone.  Any calls from outside he picked up and then transferred to the appropriate person.  It felt very much like being a 16 year old having one’s father monitor one’s calls.

Concerns about privacy are minimal in a country where people are accustomed to living in houses with paper walls between rooms, and where it’s considered bad form for people to make personal phone calls during the workday.  Japanese are good at being physically close to others without being intrusive – keeping their voices down and not being a distraction.  In fact, non-Japanese working in Japan often unintentionally create friction with their Japanese colleagues by not being able to fit into the expected norms of Japanese office behavior, and calling too much attention to themselves. For example, in my case, when I was working at a Japanese company in Tokyo there was a notable contretemps over the fact that my shoes were too noisy, which was deemed to show a lack of concern for my colleagues.

It should also be kept in mind that this type of desk arrangement is a rational response to the limited availability of space in Japan, especially Tokyo – an American-style office would be quite a luxury when space is at such a premium.

It should also be noted that visitors to Japanese companies often don’t get to see the true working conditions, because they only go to the formal osetsu shitsu (reception rooms for receiving guests).  Such rooms are spacious and formally appointed.  I recall visiting one of my clients, who had been the President of his firm’s U.S. subsidiary and then returned to Japan to a senior executive position at the parent company.  As I was about to be ushered into the reception room to meet with him and some of his colleagues, he pulled me aside and asked if I’d like to see his desk.  We went to another floor, which was a different world from the hushed wood-paneled reception area.  A tremendous number of people were crowded into an open room, with desks that were small and Spartan even by Japanese standards.  His desk was shoved up against a pillar and was notably nondescript.  “Quite a change from my office in the U.S., huh?” he said, thinking ruefully back to the days when he had a huge desk in an expansive executive office.

The Japanese office layout is also a reflection of the Japanese emphases on hierarchy and efficiency.  Because the desks are arranged by rank, and a similar arrangement is used in nearly all offices, one can walk into any company and immediately discern who has what degree of authority.

These two diametrically opposed office setup preferences have resulted in a lot of friction at Japanese firms in the U.S.  If the office is set up American style, the Japanese feel uncomfortable.  They feel isolated and out of touch with their colleagues.  They are concerned that information flow will be hampered.  On the other hand, Americans often have difficulty concentrating in the wall-less Japanese style environment.

Hybrid Style and Open Office in the US

While some Japanese companies in the U.S. opt for either a purely American-style or Japanese-style approach, I have seen some interesting hybrids.  At one of my clients, the desks have no walls whatsoever, but an elaborate white noise system has been installed which eliminates any noise distractions.  Probably the most clever hybrid I have seen was at a Japanese bank’s branch.  The desks were close together, but they were of more American size and scale.  There were tall partitions between them, which were opaque for about a foot and a half and then glass above that.  This satisfied the needs of both the Japanese and Americans.  From the Japanese perspective, people were seated close together, and the glass provided the ability for visual contact.  From the American perspective, the opaque portion of the partition provided a degree of privacy, and the glass portion served to reduce noise. It should be noted that styles are changing in the U.S., and in Silicon Valley and other startup hotbeds, open offices quite similar to the Japanese style are becoming popular. Facebook is one example of a company that has adopted an open office layout.  The stated reason for using this style?  That it promotes communication and collaboration. 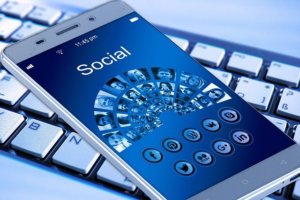 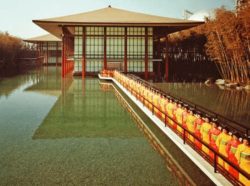