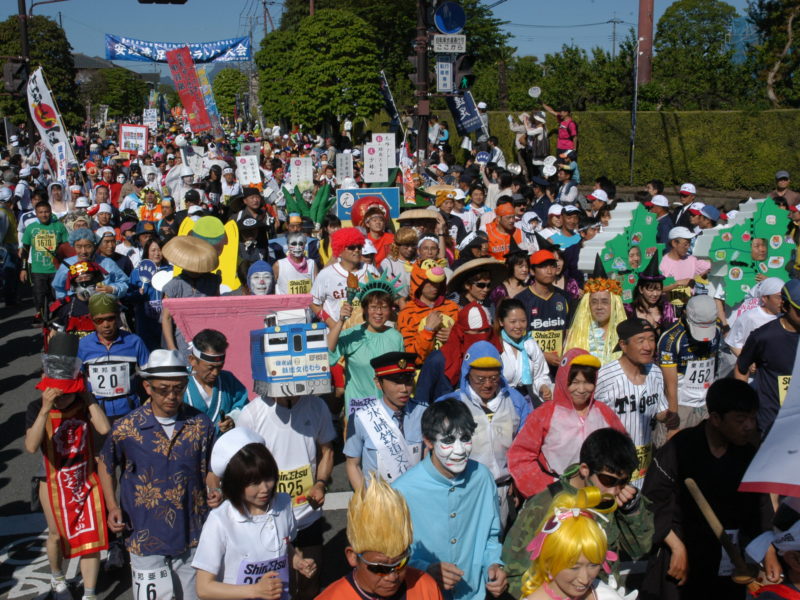 On the second Sunday of each year, the Ansei Tooashi Samurai Marathon is held in Annaka City, Gunma Prefecture. This year the race was held for the 39th time, with 1,703 runners, dressed in unique costumes, taking part. Cheered on by the spectators, the runners race in two parts, a 28.97 kilometer section that transits a mountain pass, and a 20.15 kilometer section to the goal, at the old checkpoint barrier at the Sakamoto-juku (a post station).

In each race, runners can be seen decked out in a variety of colorful costumes that range from samurai armor and old-style hikyaku (messenger runners) to characters in anime and video games, and even people dressed to resemble Japan’s newest World Heritage site, Mt. Fuji. The roots of this event extend back to the pre-modern Edo era (1603-1867), when in 1855 Lord Itakura Katsuaki of the Annaka domain organized a competition to toughen his troops by having them run a distance of more than 7 ri (approximately 27.3 kilometers) along the ancient Nakasendo Highway to the Kumano Gongen shrine at Usui pass. The names of finishers were recorded in the order of their arrival, making it one of Japan’s earliest marathons, if not the first.

What Do People Feel When Their Boss Asks to Be Friends via an SNS?