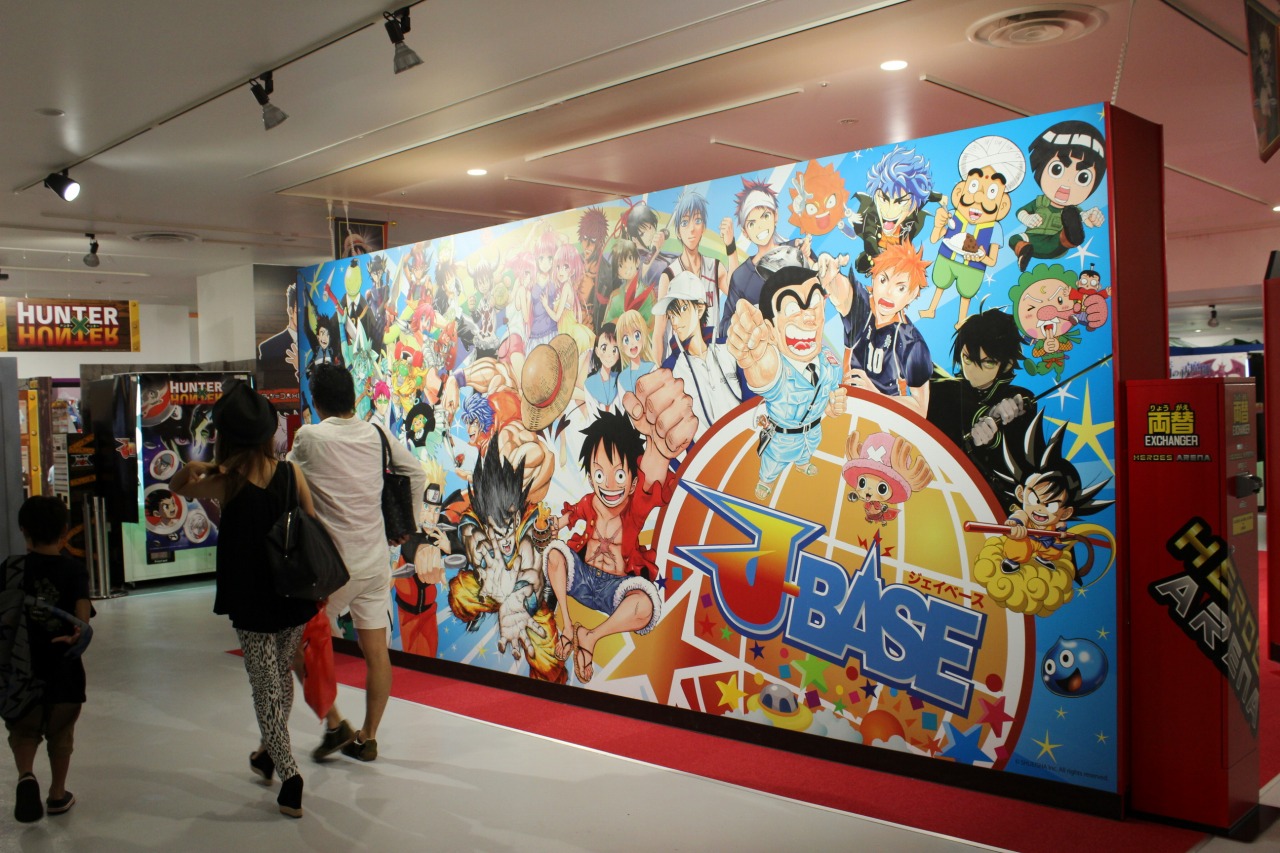 Just before 2017 summer holiday season, J-WORLD TOKYO, an indoor theme park was opened in Ikebukuro, Tokyo, featuring characters from the popular manga magazine Weekly Shonen Jump. Since its opening on July 11 and the start of summer vacation, the theme park has been visited by young children, teens, families, couples and people from abroad.

The concept of the world’s first theme park to be based on a popular magazine was announced the previous December, and widely reported in the media.

The new park’s floor area measures about 6,168m2, sufficient to convey the appeal of Shonen Jump’s popular titles. Three of them, “One Piece,” “Naruto,” and “Dragon Ball,” boast their own separate sections of the theme park. Another section, called “Heroes Arena,” presents mini games of other popular manga titles. The park also features several restaurants and shops.

Familiar manga characters can be found throughout J-WORLD TOKYO, with above three titles, “Toriko,” “Gintama,” “Bleach,” and other world-famous manga titles represented, numbering 10 in all.

“Based on the IP [intellectual property] strategy of the Bandai Namco Group, ‘facility business,’ using the most popular manga magazine’s contents, is our new approach. Using the expertise we have built up through our operation of Namco Namja Town [an indoor theme park in operation since 1996], we try to bring out attractiveness of the contents and present it both in and out of Japan.”

Contents Are All Originally Created

Upon entering the park, you are first greeted by various characters from the magazine. “Center Core” has a touch panel in its center. Visitors, upon touching the character of their choice, see it appear on the wall screen to greet them.

Gou Shirahase of Namco Limited says, “Popular characters welcome visitors on the gigantic 360-degree wall screen. Some people linger here for a long time and have difficulty bringing themselves to leave.”

Surprisingly all the animations and voices of the characters used in the park were originally produced. Mr. Saeki told me, “Even for scenes you are familiar with on TV animation, we asked animators to recreate them with a change of angles. Speaking lines were also reproduced by voice actors. Posters and other effects were created originally. Fans must take a great interest in them.”

Besides all the work, copyright issues were also a major hurdle. Contacting each author, the publisher, production, TV station, etc. to obtain permission and the issue of quality control must have been time-consuming as well as mind-boggling.

From the “Center Core” area, you can choose an area from three popular manga titles: “Dragon Ball,” “Naruto” and “One Piece.” In total, five main attractions enable visitors to enjoy a specialized world of each title.

The “SOLDIER DOCK” Adventure is a ride attraction. Visitors can ride in the Mini Merry ship or Shark Submerge III and explore the world of “One Piece,” created by stage effects and a gigantic screen.

One Piece boasts yet another attraction, a merry-go-round called the “SHIRO MOKUBA” Carousel. While visitors ride, the voices of some of its characters are played.

Dragon Ball also features two attractions. Seek! “DRAGON BALLS”!! is a kind of a treasure hunting game. On the settings of a humongous meteor plummeting towards the earth, the player must seek seven Dragon Balls hidden in the area by means of a Dragon Radar. If successful, you can go down the special area where you summon up Shenron, a Holy Dragon, to make a wish that will divert the meteor.

Another attraction is Shoot! “KAMEHAMEHA”!!. Kamehameha is a powerful beam often used by the legendary main character Son Goku. You are given an orientation on how to shoot it yourself and can virtually project the beam while wearing 3D goggles. Mr. Shirahase told me this attraction elicits a huge response from those who play it. I tried it myself and have to admit I felt great when I saw Kamehameha beamed from my hands.

Naruto is also a worldly popular manga being serialized in Weekly Shonen Jump. A fierce fight! “NINKAI TAISEN EMAKI”!! is an attraction in which people walk, push, collect or throw items in the area as instructed via wireless loudspeakers using the voices of familiar characters.

J-WORLD TOKYO features attractions from a total of 10 popular manga titles. When I asked the producer Mr. Saeki what was the greatest difficulty when creating this theme park, he replied, “We needed to grasp the whole world of each title and present it nicely, in a way people can enjoy.”

Other than the attractions mentioned above, you can spot design motifs and drawings related to the 10 titles throughout the park. The eateries also serve dishes that relate to the manga. For instance Café Mademoiselle, operated by Sanji, one of the characters of “One Piece,” is quite unique, with all the items on its menu tying into scenarios from “One Piece.”

A family from Spain, dining at J-World Kitchen, another eatery in the park, told that just the sight of those dishes was enjoyable. The father enjoys reading “One Piece” and his 6-year-old son is hooked on “Naruto.”

“It’s exciting to be able to see all the characters in a different setting from the manga,” said the father. “My son got so excited when he went into the Naruto section.”

The family, on their first visit to Japan, made a visit to J-World one of its main priorities. Asked how he knew about the theme park, the father said, “I got to know it through a Japanese subculture website. I took many photos. I will brag about my visit here by putting up photos on my Facebook page.” It seemed that the father was more excited than his son. The mother is also a fan of other manga.

As Tokyo has been designated the venue for the 2020 Olympic games, the number of inbound tourists to Japan can be expected to increase. J-WORLD TOKYO will no doubt be one of the important spots by which Japan’s “soft power” will be disseminated to the rest of the world. The park entrance fee is 1,300 yen ($13) for adults and 1,000 yen ($10) for minors under 15. Additional charges apply for some attractions. The hours of operation are from 10:00 to 22:00, 365 days a year.

The park was closed due to the pandemic.

The TRUTH About MOM GENERATIONS in Japan