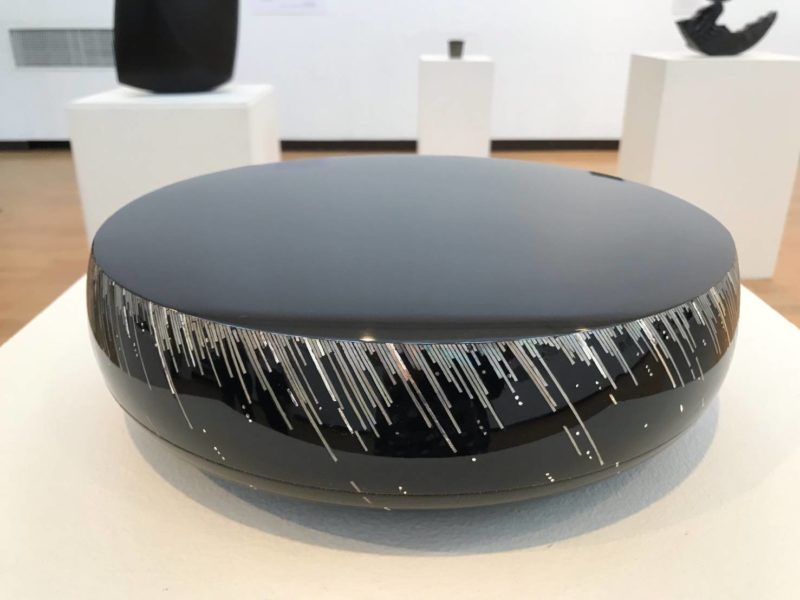 What is Urushi of Japan? Maki-e, Raden,

Lacquer trees and their saps

“Shikko” (漆工) is a genre of craft which uses sap from the Anacardiaceae family of trees. Lacquer trees mainly grow in South East Asian countries, and depending on the species of tree, there are three main different ingredients in their sap: urushiol, laccol and thitsiol. Urushiol-based sap can be collected from the urushi-no-ki, (Toxicoden-dron vernicifuum), which grows in Japan, Korea and China.

In Japan, urushi-no-ki has been cultivated mainly in the Tohoku area. Urushi (tree sap) is tapped from mid-June to mid-October, whilst the trees are vigorously engaged in photosynthesis, grooves are cut into the tree trunks and the sap is then collected. Even using the intensive “koroshi-gaki (killing tap)” method, which involves cutting down the tree after half a year of concentrated tapping, as is practiced in Japan, it only yields about 200cc of sap from a 10-15 year-old tree.

However, compared to synthetic varnishes made from fossil fuel, which may run out in the near future, urushi-no-ki is a sustainable source as it can be cultivated by sowing seeds, cutting roots or nursing shoots from the tree stumps.

Unlike most other ordinary paints, urushi is cured by oxidant polymerization with the help of an enzyme in the sap in temperatures between 20-25℃ and 65-80% humidity. Urushi coated objects are usually put in special cabinets or boxes called urushi-muro (urushi chamber) or urushi-buro (urushi bath) where conditions are
carefully controlled to provide an ideal environment, and normally left there to cure overnight or sometimes for a few days.

Urushi on ceramics or metals can be cured not with an enzyme but by baking at temperatures of over 100℃ in an electric oven or by heat from burning charcoal. Once cured, urushi coats only not be dissolved in acids, alkali or solvents, but they also become heat and water resistant. However, urushi coatings are degraded by ultraviolet light and will become weaker after prolonged exposure to sunlight.

Urushi can be used as a varnish, a painting medium and an adhesive. The natural colour of urushi is milky beige when just oozed from a tree, but after the “nayashi (stirring)” and “kurome (blackening)” processes, it becomes transparent, dark brown and thick enough to be applied with brushes. Coloured urushi can be made by mixing urushi with special pigments, or by means of a chemical reaction by adding iron to make transparent black urushi.

As urushi can adhere various materials together and by combining these unique properties of urushi, we can expand the variety of formative expressions.

The old Japanese name for this technique is “soku”, and it is called “jia-ning” in China (Japanese pronounce is kyo-cho). A notable example of this technique is the Ashura or Asura statue of Kofuku-ji temple in Nara prefecture. Objects made using this technique are lightweight, durable and a larger variety of shapes can be made.

Firstly, a prototype is made with clay and a cast is taken with plaster to get a mold. A paint-releasing agent is painted inside of the mold and when the mold is dry, handmade paper or hemp cloth is pasted to it using nori-urushi (a mixture of raw urushi and rice paste). This process is repeated until it becomes the desirable thickness and it is then heated without removed from the mold to prevent warping. When cooled, it is removed from the plaster molds and urushi foundation coats, followed by urushi coats are applied to finish.

“Kyu” means paint urushi with spatulas or brushes. This includes various techniques such as “nuri-tate” (or hana-nuri), finishes without polishing, “roiro-age”, a polished finish, “bokashi-nuri” gradation painting, “shibo-urushi”, a a viscous mixture of protein and urushi which can create a three-dimensional effect, and “kawari-nuri” sanded to show many colored urushi layers underneath.

This technique emphasizes engraved dots, lines and planes on lacquered surfaces by the use of special knives and chisels. The grooves made by the carving are then rubbed with urushi and fine gold or silver powders or leaves are inlaid. Japanese chin-kin shows free form expressions like brush drawings. There are two types of chisels: Wajima (Ishikawa prefecture) type chisels are made of cylinder shaped steel bars, and Kawatsu-ra (Akita prefecture) types are made of fat steel sheets with u-shaped tips. It is called “Qiang jin (means spear gold, Japanese pronounce is so-kin) ” in China, as it was started from thin needle engravings, but the use of gold inlays started at a later period.

Thin metal sheets such as gold, silver or tin are fixed by using urushi as an adhesive and then coated with several layers of urushi, sanded through and polished to finish. Further finer engraved lines are sometimes added onto the metal surfaces. This technique is called “ping-tuo (Japanese pronounce is hei-datsu)” in China.

Related Techniques Based on Urushi

A decoration technique using the eggshells of quail, chicken and duck. In urushi it is impossible to make pure white because its intrinsic color is dark brown, but eggshell white can give effective contrasts of black and white. By using different types of eggs, or changing the size and density of the shell pieces, depth and three dimensional effects can be added on the objects. Vietnam using this technique. Many “Qi hua” (urushi pictures) are made in China.

Freely painted decorations with colored urushi made of “suki-urushi” (transparent urushi) and special pigments for urushi.

This is the general name for deep-carved lacquer, which started in the Tang Dynasty (618-907) in China and was introduced to Japan in the Muromachi period (1336-1573). Dozens to hundreds of pigmented urushi layers are built up before the carving of three-dimensional patterns or shapes.

The urushi surface is engraved with knives, then the grooves are filed with colored urushi using spatulas. This is repeated several times and then sanded flat and polished to finish. The substrates are mostly made using the “rantai” (basketry work with finely split bamboo) technique. This technique was first introduced to Japan in the Muromachi period (mid 14th to late 16th century) from South East Asia (Thailand and Myanmar), Tamakaji Zokoku (1806-1869) developed this technique and it is still practiced mostly in Takamatsu city, Kagawa prefecture and its surrounding areas.

Metal leaf decorations are often seen on South East Asian lacquer work. Firstly, the parts which are not to be gilded, are masked with water-soluble masking agent. When it is dried, urushi is applied to the entire surface and gold leaf attached. After the urushi is cured, the masking agent is washed away with water to finish.

A technique using ivory, horn, thick mother-of-pearl, jade, precious stones, coral, ceramic pieces or wood which are cut and carved into desired shapes and then attached onto the urushi or wood surfaces.

Zon-Sei (the name of origin is unknown)

This is a technique emphasizes the outline of a design with fine engraved or chin-kin lines after urushi-e or kin-ma patterns are made.

This is often seen on Ryukyu (Okinawa prefecture) lacquerware. Firstly, the Urushi is heated to suppress the effect of an enzyme, then a massive amount of pigment is added and the mixture is repeatedly pounded until it becomes a smooth paste called “tsuikin-mochi”. This paste is made into a thin sheet and then cut into the desired shapes. They are then fixed to the objects and details are added using metal spatulas while they are still soft and then it is cured. This unique technique can be done in Okinawa where it is warm throughout the year.

Metal powders can be fixed to the urushi surface using urushi thanks to its strong adhesive properties after which it is given a metallic gloss by polishing. One of the oldest “maki-e” works in existence is Kingin Densou no Karatachi (a foreign-style long sword with gold, silver and mother-of-pearl decoration) which is stored in Shosoin, Nara Prefecture.

This technique was developed during the Heian period (794-1185). Firstly, a picture or pattern is drawn with maki-e brushes using urushi onto an absolutely flat urushi surface, then maki-e powders of different grades of coarseness are
sprinkled onto the wet ground of the pattern. The object is then put into a wet chamber for curing. After sealing the maki-e powders with a sufficient amount of raw-urushi, a coat of urushi is applied to the entire surface.

When the overcoat urushi layer is well cured, the pattern is then sanded through to the surface with suruga-zumi (charcoal made from the tung oil tree, used to be made in Suruga area) it is then polished several times to finish. The patterns appear at the same level of the urushi surface, and by sprinkling powder sparsely or densely, depth
in the pictures can be expressed. Below is the process of Togi-dashi Maki-e.

This technique has become more popular since the Kamakura period (1185-1333) after fine and even sized metal powders became available. The most famous examples are Kodaiji Makie (maki-e made for Kodai-ji temple in Nara).

‘This technique, which has been observed since the Kamakura period, raises the pattern by painting patterns with a special urushi called Taka-age-urushi, or by sprinkling silver or charcoal powder onto an urushi ground, or by using sabi-urushi (a mixture of urushi and fine clay) for relief effects and profundity. The process is repeated until it has reached the desired thickness. An urushi coat is then applied to it and sprinkled with gold or silver powders. The subsequent processes are the same as in hira-maki-e.

“Ra” means snail and “den” means to decorate, so “ra-den” generally refers to mother-of-pearl decorated objects. There are two types of raden: one is “kiji-raden” which directly decorates a wooden surface, and the other is “urushi-ji-raden” which decorates an urushi coated surface. They are also referred to by different names according to the thickness of the shell.

Thin, green snail, abalone and white-lipped pearl oyster shell sheets of about 0.1mm called “usugai” are cut into desired shapes using a needle or a knife. Another method is to stamp out shapes with specially shaped chisels, or masked with urushi and unwanted parts are dissolved away with acids. The objects are then attached to the surface using urushi as an adhesive. Several coats of urushi are applied, curing well between each layer and then the shell is sanded through. Doing “fuse-zaishiki” coloring on the back of shells gives more color variations.

“Atsugai” means thick slices of mother-of-pearl of over 1 mm thickness. They are cut into the desired shapes by using fret saws and files. The urushi surface is carved down into in the same shape and thickness of the shell pieces and they are attached using an extra strong urushi blend. An alternative method is to directly stick them onto the wood substrate first, then apply urushi foundation coats followed by subsequent urushi coats in layers until it reaches to the same level of the shell, it is then sanded and finally polished to finish. Even though the same kind of shells are used, astugai accentuates the brilliance of pearl-white better than usugai.