The Morning Meeting in a Japanese Company

A couple of years ago, I was at one of the Panasonic group companies in the US, working with a team of American engineers. They were embarking on an ambitious collaborative project which would involve intensive communication with Japan. I asked the people in the group to tell me what they like best about working with the Japanese. “Dedicated,” said one engineer. “Tell me what you mean by that,” I asked. “Well, I went to Japan last month, and the group over there starts each day with a meeting. Not a long meeting, in fact everyone is standing up, but everyone is there together and able to quickly touch base. Also, after everyone is assembled, the manager reads from a scroll. It seemed a bit unusual to me, but when I asked they said it was the Panasonic Basic Management Objective. We have a copy framed here in our office, which I had never really looked at before. Anyhow, I was impressed that they start each day with the thought in their mind about ethical behavior and contribution to society. In the US, when we come to work in the morning, we grab a cup of coffee and head straight to our desks.”

I must say not everyone appreciates this aspect of Japanese company life. I don’t even think all teams within Panasonic start their day reading the scroll, but many do, even in the US. But what he said caused me to think about the world view and ethical frameworks embodied in Japanese company philosophies. I took a closer look at the Panasonic system, and some other companies as well. Here are some thoughts about these systems and their historical roots. I think you will gain a deeper understanding of the fundamental value systems of the Japanese company where you work, or the Japanese companies that are your business partners.

This is what is written on the scroll. “Recognizing our responsibilities as industrialists, we will devote ourselves to the progress and development of society and the well-being of people through our business activities, thereby enhancing the quality of life throughout the world.” It goes well beyond the US-style mission statement that is focused solely on the business, as in “We aim to provide total customer satisfaction by producing top quality products at reasonable prices.” It expresses a mindfulness of how business and manufacturing activities influence society.

The Basic Management Objective, which originally formulated in 1929 by the founder Konosuke Matsushita (1894-1989), is a core part of a larger system, Panasonic’s Management Philosophy. Another essential part of the Management Philosophy states “The main purpose of production is to manufacture items of good quality for daily use in abundant supply, thereby enriching and improving the quality of life for everyone.” (The President Declaration in 1932)  The ultimate 250-year goal of the company is “the elimination of poverty from this world.” Talk about a long-range corporate vision!

As a code of conduct for daily work, there are Seven Principles: contribution to society, fairness and honesty, cooperation and team spirit, untiring effort for improvement, courtesy and humility, adaptability and gratitude. When you work with people from Panasonic, it is very clear that Panasonic recruits for these qualities and develops them in their employees.

Other companies besides Panasonic have business principles which form the foundation for action and decision-making. In fact Sumitomo Corporation can trace its house rules back to the mid-1600s!

How is that? When you go back in time to 16th century Japan, the country was in an almost perpetual state of turmoil and warfare. In the early 1600s, the country was unified under the Shogun Tokugawa Ieyasu. The system he devised of stable peaceful government lasted right up to 1868, very long political structure in history. The Tokugawa shogunate chose Confucian principles of loyalty, reciprocity and balance between self-interest and altruism as a value system that would train samurai warriors’ energies away from war and toward peacetime service. Meanwhile merchants had low social status. But they had increasingly greater economic clout. They were not simply in the business of making a quick profit. They were a valuable part of the social framework. In fact they were regularly forced to forgive the virtuous samurais’ debts! The great merchant houses developed “house rules,” which integrated Confucian ideas of hierarchy and loyalty with values like “a penny saved is a penny earned,” hard work, and the importance of the long-term existence of the merchant house.[i]

In the US, we often talk about finding “meaningful work,” that is, personally satisfying to ourselves. Unless we work in a “helping profession,” we don’t usually think of our work as contributing to society, or ourselves as “industrialists” just because we happen to be working for a manufacturing company. We don’t look back 50 years or ahead one hundred years when making company decisions. In Japanese companies, older members of senior management have respect and influence, not because they have their finger on the pulse of the latest trend but because they are the institutional memory in a long continuum.

Unless we work for the military, we are unlikely to work for an organization that “stands for something.” There is less loyalty from workers toward companies, and from companies toward workers. For the elite Japanese who is talented and lucky enough to work for a Panasonic or a Sumitomo, working means belonging to a significant institution. The only analogy I can think of in the US is the “IBM man.”

The company culture is very neatly articulated in the following five points. The viewpoint and values are somewhat different from those at Panasonic.

As with Panasonic, you can see from the list what Honda looks for in recruits and the type of workplace it tries to nurture.

Ryusaburo Kaku, Chairman of Canon, Inc., introduced kyosei as a corporate value. A company that is practicing kyosei establishes harmonious relations with its customers, its suppliers, its competitors, the governments with which it deals, and the natural environment. If you work for a Japanese company, I recommend you take a moment and read the business principles that are likely framed in some conspicuous place in your office. First, you learn what values inform the overall business strategy. Second, you may also learn a little bit about why your colleagues are the way they are.

[i] The Confucian Roots of Business Kyosei, by Calvin M. Boardman and Hideaki Kiyoshi Kato gives an excellent account of Japanese business philosophies both in pre-modern times and today. 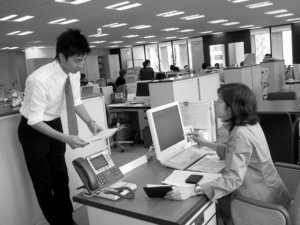 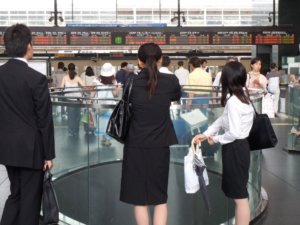