“Because you never know what happens tomorrow… I want to distinguish what’s REALLY necessary for me” or so said a middle-aged Tokyo women in a focus group in August 2011. The experience of March 11th and the ongoing threat of the radiation scares has made millions of Japanese people reconsider priorities. You might think that luxury purchases would take a back seat in such pressured times. The real truth is rather mixed. While overall luxury spending may be down slightly, it is amazing how many luxury goods brands have found a quick recovery.

According to one statistics done by Japanese government, just six weeks after the earthquake is over, 75% of all women were saying that their beauty related expenditures were not decreasing. Among single women in their 20s and 30s that number was nearly 80%. So why doesn’t the importance of beauty go down at times of crisis? Staying beautiful is an accepted form of self-cheer as well as a small luxury - and many feel that not only should it be allowed, it is in a way a necessity especially in times of crisis. We heard comments like:

“I think having beautiful makeup helps me to relax a bit,” said a 26-year-old woman.

“I am economizing on everything else. Skin care is like entertainment for me – small, but I can enjoy the time,” said a 35-year-old mother.

“You never know when a crisis will hit you. So just trying to enjoy being pretty as much as I can while I can,” said a 28-year-old woman.

We found that many women talked of maintaining their beauty regime as a sort of national duty. They told us that keeping up appearances, looking good and happy was an important way they could contribute to the national cause, which might sound a bit shallow except for the overwhelming numbers who seemed to agree and the historic precedent. We found that after previous disasters the same sentiment held true. Following the Great Kanto Earthquake of 1923 there was a great deal of news coverage concerning young women doing their best to cheer up society by looking pretty and positive.

Crisis makes people to be a little extravagant

Similarly we found that two weeks after the earthquake 44% of women were talking of needing a “little bit of indulgence” and that by September over 60% were openly talking of the need to indulge. Similarly, the coronavirus pandemic has led to more and more people staying at home and buying luxuries to make themselves a little more comfortable at home. The crisis seems to encourage unexpected consumption.

Of course the nature of those indulgences may have changed a little. In October we interviewed senior executives at a number of luxury brands and found that nearly all were reporting that their end of year sales were going to be as predicted or even slightly ahead of annual forecast, and much recovered from forecasts made mid-year. But the nature of their recovery was often different from the expected. Department store sales had not continued to decline as much as in recent years. Outlet Malls, where many luxury retailers had seen tremendous growth in recent years with outlet exclusive offers, saw relative sales decline as people stopped traveling. A combination of fuel shortages initially after the earthquake and subsequent high prices have discouraged families from weekend shopping trips to these malls situated on the outskirts of the major cities.

Meanwhile on-line shopping has increased. In part this can be attributed to a phenomenon first noticed in New York after 9/11 called “embarrassment shopping.” Quite literally shoppers of luxury items may feel it inappropriate to be seen walking out of stores with famous name shopping bags. Less embarrassing but equally gratifying to go on-line and purchase. At the same time in the immediate months after 3/11 people found shopping on international sites as a way to track down items with limited availability.

So, new patterns have developed. Add to that many luxury brands taking action to support recovery that also reinforced their image of being “solid” and worth supporting. As one 30 something woman told our researchers, “My images of brands that took action for recovery definitely went up.”

Activities such as the “Love & Hope” photo book created by Tiffany & Co., in which photographer Leslie Kee took photos of 200 celebrities while also showing Tiffany’s products with the profits donated to the Red Cross. Many brands focused on fund raising such as Mikimoto’s charity event at their store in NY which gained a lot of publicity in Japan and reinforced their image at home. While Take and Give Needs (a wedding producer company) campaign of donating 5,000 yen (about US$63) for each couple that uses their service is an example of targeting a mini “growth industry” that in turn supports luxury purchasing.

After the earthquake until the pandemic, many couples decided to strengthen their ties and the number of weddings and engagements has risen considerably compared to previous years. The result is that hotel reception areas, wedding arrangement firms and jewelers are doing well. So are department stores where people often shop for luxury items as gifts. Large department store chains Sogo and Seibu both reported a 10% increase in ring sales from April to August. Mitsukoshi Department Store in Sendai, one of the worst tsunami-affected areas, saw a 30% rise of sales of rings compared to the previous year. One trend - many couples whose wedding plans were foiled by the disaster decided to invest the money on a more expensive ring instead – a long-lasting object rather than a memorable experience. Tiffany, a very popular choice for wedding rings in Japan, saw a 21% boost of sales in Japan in the second quarter.

The reasons for buying luxury products in troubled times seem different. Instead of looking for prestige or status, middle class people are reconsidering values like long-lasting. In fact, among 30- to 50-year-old married men and women, one of the key words used to describe their view of the next five years in our “Fukkatsu: Japan Rebuilds” research has been “security.” So, perhaps it is not surprising that there has been increased interest in items that will last and provide emotional and financial security. Items like Mikimoto pearls have been loved for over century for simple, ageless design that does not go out of style. Mikimoto sales were reported as up 30% in August 2011 compared to last previous year, with some classic designs up by 60% or more.

The Japanese word teiban means a standard, something that is synonymous for the whole category. They give a sense of security. For wristwatches, the teiban is definitely Rolex and their sales were reportedly up by 30% in the second quarter compared to 2010. Watches are popular as return gifts for yuino (a ceremonial exchange of engagement gifts), a Japanese tradition of a bride’s family giving gifts to the groom’s family to symbolize the bond of marriage. Thus, ring sales have consequently boosted watch sales.

A disaster drives a need for security, to invest in the future both emotionally and financially, but to do so by investing in items that are perceived to last. The luxury market is not all rosy. Many marketers are suffering and having to rethink their product profiles and messaging. But the reality is that Japanese people have, for three decades, been among the world’s most voracious luxury consumers, with very detailed and strong knowledge of brands and their worth, and it seems that they are willing to invest in that knowledge. 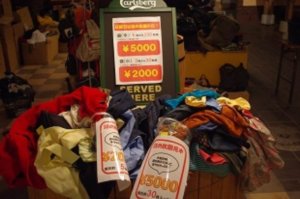 Sense of Belonging in Japan