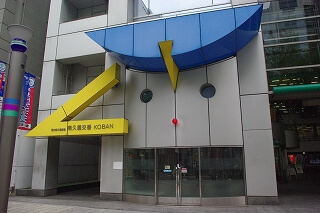 Is this a tourist spot? People are stopping and asking men or women in uniform for directions. Actually these are Japanese “Koban” (police boxes). They were constructed around cities in order to maintain order and assist the public. One can often see pedestrians stop by koban in cities to ask for directions. The koban system is seen as one factor in the low rate of crime in Japanese cities and for that reason has also attracted interest of police organizations around the world, and it has been modified and adopted in such countries as Singapore, Indonesia, the United States, Brazil and other places.

Although the government in recent years has been hard strapped for funding, in order to make koban more familiar to the public, attention has been devoted to koban designs that will blend in better with the surroundings. Here’ we’d like to introduce some examples of interesting koban designs, mainly in Tokyo.