What are Hina Dolls:

A Hina doll collection is the centerpiece of “Girl’s Festival” on March 3, a celebration that began in the 18th-century when wealthy Japanese families displayed expensive doll sets for their daughters. It was believed that dolls could absorb evil spirits and allow the girls to receive good fortune. Another association with the dolls is the importance to not delay putting them away soon after March 3 or the daughter’s opportunity for marriage would also be delayed. Initially, Hina dolls consisted only of the Emperor and Empress, but over centuries, the collection developed into multiple levels with a full court of musicians and ladies-in-waiting, and miniature furniture. However, because of the growing number of smaller urban homes, the trend is reverting back to only the Emperor and Empress dolls.

Takenaka Hina Dolls is located a few minutes stroll from Machiya Station, in the old downtown district of Arakawa City, Tokyo. There is a big red banner on the roadside to welcome visitors because the old wooden building that houses the workshop is set quite far back. Shigeo and Yoshie Takenaka are both recognized as Living Cultural Treasures of Arakawa City and Shigeo is also recognized as master artisan of traditional arts by the Japanese government under the name Takenaka Kouhou.

The third generation of doll makers in his family, for over 50 years, Shigeo has sat quietly working surrounded by a huge array of tools. Having nipped his finger the previous day, Shigeo can only measure out cloths today because he cannot put enough pressure on his finger to cut or fold cloths properly. So detailed is the work that even a veteran master can still make mistakes.

The first generation from Takenaka doll maker was Shigeo’s grandmother Tsuru, a samurai (warrior) housewife working at home around 1892 to support her family. Although they were descendants of the famed samurai Takenaka Hanbei, with the declining need of warriors, samurai families needed to financially support themselves.  Yet because of their elevated social status, it was difficult for such samurai families to openly engage in business because profit-making was regarded as an activity low in ethics. Tsuru found that if she made dolls from materials they had at home, there was a demand from the rising merchant class who could afford to buy these exquisite heirlooms.

When her son, Kosuke, took over, he abandoned the façade of a samurai family being too respectable to operate a business and turned doll making into his profession. Yoshie explained that it was not always an easy transition for a samurai to run a business but the high quality of craftsmanship was recognized. In the economy boom after WWI, more and more families were able to financially afford Hina dolls so by Shigeo’s generation, business was prosperous. At one time, around 1955, Takenaka Hina Dolls had over 10 craftsmen who lived upstairs and worked downstairs at the shop. But as Japan’s birthrate declines, the demand for dolls tapered off. Yoshie notes that Japanese families still buy a doll set for newborn girls but in the last 20 years, the demand for male dolls has dwindled.

Now it is just Shigeo and Yoshie who continue making Hina dolls based on the tradition developed by his father Kousuke in a style he called “Kouhou.” The style is characterized by the Empress doll wearing eight layers of material in a subtle color gradation with the most vibrant tones on top. He also considered the exquisitely handmade and hand painted faces of Kouhou dolls another distinctive feature. When the faces are created by hand rather than mass produced, there is a glow and individualized expressions. People who buy doll sets from Takenaka are referred to by word of mouth and can appreciate refined craftsmanship.

Into their 70s, Shigeo and Yoshie are not looking for someone to take over the family business, thus Takenaka Hina Dolls will end with his generation. While their daughter is capable of helping out during the busy season, she is not committed to taking over the family business. Shigeo says he is not interested in teaching outsiders the trade. “I learned by watching and was never ‘taught’ so I have no idea of how to teach. With my family members, it’s easy like how my father would yell at me constantly. But with strangers, you have to be more careful so I don’t want to bother.” Indeed, the beginning, the boom and the decline of Takenaka Hina Dolls is reflective of Japan’s rich and volatile history.

At Takenaka, there is a workshop to make simplified Hina dolls. These workshops are two-hour sessions for three days. The cost is 30,000 yen ($375). However, because of the cost and time commitment of doll-making, it is not practical to accommodate most visitors. Therefore they also offer workshops to make kinran card cases.

Kinran means “golden brocade” and refers to the exquisite fabric that has gold or silver threads woven into the pattern. The base material can be heavy cotton or satin. Kinran was originally brought to Japan from China during the Kamakura period (1333-1483) by visiting monks who wore kinran robes. To make Hina dolls, using kinran was essential to represent courtly emperors and empresses.

Using materials left over from the dolls, these small cases are handy to hold business cards or membership and point cards from retail stores. It only takes between 10 to 15 minutes to make one card holder. “Besides the brilliant colors, people like it for practical reasons such as unlike leather which is smooth and slippery, kinran is easily to grasp for seniors with lower dexterity,” explains Yoshie

Workshops typically run from May to December (off season for doll making) but Takenaka will accommodate special requests.

How to make a card case:

(2) Next you receive two pieces of pre-cut cardboards, most are recycled postcards.

(3) Then you glue one piece of cloth onto a cardboard. It is important not to use too much glue and create bulges.

(4) After gluing, use the small iron to seal the cloth to the paper.

(5) Glue and iron the other piece of cloth onto the other cardboard.
(6) You then take the parts of both cloths not covered by the cardboard and fold them together. You glue and iron again.

(7) Finally, you place clips over both ends for about 10 minutes until the glue dries. 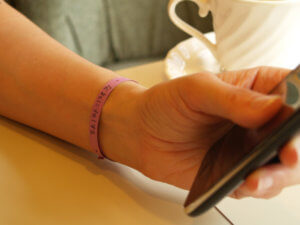 Wrist memo for a forgettable person