During her visit to Japan in February 2005, Kenyan environmentalist and 2004 Nobel Peace Prize laureate Wangari Maathai was introduced mottainai campaign – an accurate reflection of the to an ancient Buddhist term that captured her imagination. That term was mottainai, a Japanese word that describes a sense of gratitude for natural resources and a feeling of regret when they are wasted. Deeply sympathetic to the concept, the late Ms. Maathai launched her own to promote conservation practices. She employed the word because she knew that in Japan its meaning conflates wastefulness with sinfulness very Japanese attitude of respect for the resources that nature provides.

14 years later, at the 2019 Eco-Products trade show held in the Tokyo Big Sight Exhibition Center, the values inherent in "mottainai" were front and center once again, as Japanese manufacturers
showcased their prowess in the pursuit of Earth-friendly products and technologies. Under the slogan “The Greener, The Smarter,” the 21th annual event explored numerous approaches to helping us make better decisions in our daily lives to achieve a greener future for all. One of the largest environmental exhibitions in Japan, the fair drew approximately 800 exhibitors and more than 180,000 business people and consumers interested in environmental issues, including some 20,000 students who visited the event on school field trips. One measure of Eco-Products’ increasing relevance is how big it has grown: the inaugural exhibition in 1999 drew only about 280 exhibitors and 47,500 attendees. Co-organized by the Japan Environmental Management Association for Industry and news paper publisher Nikkei, Inc., this year’s exhibitors included companies and organizations representing such varied industries as automobiles, consumer electronics, energy, housing and retailing. They displayed their cutting-edge technologies, eco-friendly consumer products and ongoing environmental initiatives, and attendees enjoyed opportunities to ride low emission vehicles and join off-site tours to nature preserves and recycling facilities. Walking through the vast hall filled with products, one sensed the irony of juxtaposing the "mottainai" spirit with the culture of consumption. Yet the exhibition presented a wonderful opportunity to ponder how much value we attach to such resources as clean water and air – the irreplaceable “products” that the Earth provides, which can only be preserved if we employ the types of ingenuity and innovation so prominently on display at Eco-Products 2019. The next Eco-Products trade show is scheduled for December, 2021.

System “Amebits”(Kazedaichi-products Co., Ltd.) K a z e d a i c h i - p r o d u c t s C o . , Ltd. showcased its electricity-free rainwater utilization system called Amebits. The wooden tank – made of timber gathered from environmentally friendly forest-thinning – is strengthened with a bio-based preservation agent that makes it three to four times more durable than ordinary wood. According to the company, the tank will resist decay for a decade buried under the soil. Lion Corporation, one of Japan’s largest makers of body-care products, already employs the system at its headquarters in Sumida City, Tokyo.

(Pulse Corporation) Pulse Corporation produces a wide variety of wood-sourced products, including interior accessories, stationery, toys and games. The company uses Japanese forest-thinned lumber that is manufactured overseas and then returned to Japan as finished products for the domestic market. Portable Water Purifier “Eco Ply Glu Kun”(Poly Glu International Co., Ltd.) Eco Ply Glu Kun is a portable water purifier developed by Poly Glu International Co., Ltd. (www.poly-glu.com). The plastic 10-liter water dispenser has a handle on the side that rotates the entire device. The user pours impure water into the tank along with a packet of powdered polyglutamic acid (PGA) and a filter sheet. A major constituent of the gummy Japanese food natto (fermented soy), PGA aggregates impurities in the water so they will adhere to the filter. Manually rotating the tank about 20 times thus produces potable water. Sugarcane-based Biomass Polyethylene Bags “Biolefin 25H” (Fukusuke Kogyo Co., Ltd.) Biomass plastic bags are com made of corn-based poly lactic acid (PLA), but making bags from corn

Fostering Environmentalists for The Next Generation

One of the major target audiences of the Eco-Products trade show has always been students. This year’s event saw some 7,000 student visitors per day, raising the total to 115,000 young people since 2000. Helped by the complimentary shuttle bus services for elementary and junior high school groups, about 80% of the schools that took their students to the fair this year were regulars, mostly coming from Tokyo, Chiba, Saitama and Kanagawa prefectures. Those repeater schools value the show’s many opportunities for students to learn about today’s environmental issues through hands-on experience, as well as from informative take-home materials written in plain language. Most groups spend significant time in advance of the event learning about the companies and products that will be featured, and student attendees often share their newly acquired knowledge by writing about their experiences for their school newspapers. Show organizers provide students with Eco Study Note, an information package about the fair and its exhibitors that also serves as a convenient notepad on which they can record information gleaned from interviews with exhibitors at their booths. The guestbook at the exhibition hall this year featured many comments from students. While some simply stated how much they had enjoyed themselves, others expressed their resolve to think more about the environment or to do what they could to promote environmental activities.

Principal, Tatsumi Elementary school, Koto city, Tokyo My school has sent students from Grade 4 to 6 for the last 10 years or so. The event provides a great opportunity for young people to discover what companies are doing and to become aware that there are things they can do as well. We publish the students’ stories from the event in the school newspaper, and the field trip enjoys strong support from parents. Teacher, Suginami Daiyon Elementary school, Suginami city, Tokyo We started this field trip four years ago as part of our focus on environmental studies. About 50 students participated this year. My students enjoyed learning about the advanced technologies behind simple cardboard boxes and recycling programs.

Sixty-two cities, townships, villages and cities of Tokyo Prefecture came together in 2007 to address environmental concerns including global warming and nature preservation. With a concentration of some 13 million people – more than 10% of the nation’s population – Tokyo can serve as a model with influential initiatives and programs on the environmental issues Japan faces. Coordinated by the associations of mayors and municipal administrators, the Green Tokyo initiative has so far distributed bitter-melon seeds to promote urban gardening as an effort to create a “Green Curtain” in the
prefecture. Ota City has announced its Environmental Guiding Plan in March 2012 under the initiative, while the Ogasawara Islands promote eco-tourism for their World Natural Heritage site.

Japanese Get Serious About Forest Make-Overs

Japan’s forests cover about 70% of the country’s landmass, but some experts warn that they are gradually losing the ability to absorb the greenhouse gas carbon dioxide. Japan’s forested land increased significantly after World War II through ardent reforestation efforts, but when inexpensive foreign lumber started arriving in Japanese ports, domestic timber lost its cost-competitive advantage and forests were often abandoned. With little maintenance, many became overgrown to the point of impoverishing the soil. (See the cover photo.) Fortunately, revitalization efforts are underway. In recent years the Forestry Agency of the Ministry of Agriculture, Forestry and Fisheries has promoted forest-thinning, a natural process of rejuvenation. The agency is actively engaged in forest maintenance efforts as well as promoting the use of timber harvested from the thinning process. While the Japanese government focuses on forest management through thinning, most of the world is more concerned about deforestation resulting from over harvesting. Japanese corporations and consumers have started to take notice. Products carrying the seal of the Programme for the Endorsement of Forest Certification (PEFC), the world’s largest forest-certification organization, have made inroads in the Japanese market. Examples include packaging for the popular chocolate-covered biscuits “Fran” made by Meiji Co., Ltd., which uses pulp from PEFC-certified forests in Finland. It is widely recognized that forests play an important role in alleviating global warming by absorbing carbon dioxide. They are also a renewable resource in themselves, providing valuable materials employed in a variety of manufactured goods that improve our lives. Proper maintenance and sustainable harvesting hold the key to retaining and increasing the value of this vital resource. 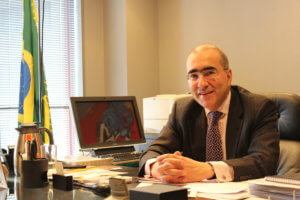 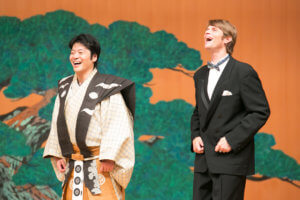 Kyogen, the Longest Lasting Theatrical Performance in the World