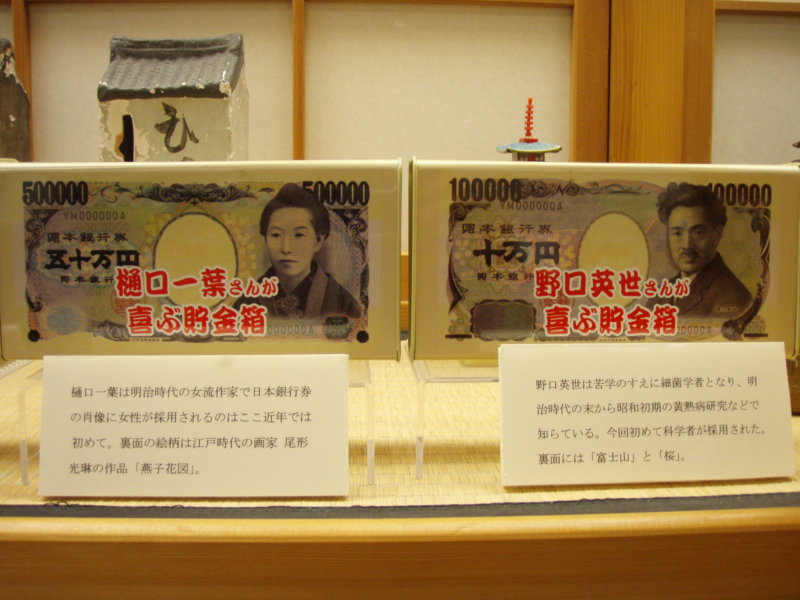 “A man takes aim at a bear and shoots a coin into it.” “A dog with a coin in his mouth jumps through a hoop and tosses it into a barrel.” “A clock stops unless it is fed some money regularly…” All these gimmicks work in coin banks. It is interesting to see how they entice the owner to put in money.

At the Sekai no Chokinbako Hakubutsukan (the world money box museum), in Amagasaki City, Hyogo Prefecture, visitors can see a fascinating collection of money boxes assembled from all over the world. The museum exhibits nearly 14,000 coin banks or money boxes collected from 62 countries. The first-ever money box museum to be opened in Japan, it has been ranked at the top level internationally in terms of both quantity and quality of items on display.

About two-thirds of the coin banks on exhibit here were made in Japan, in the years spanning the Edo era(1603-1867) to the present. The remainder, which have been collected from abroad, were mainly produced between the late 17th to the early 20th century. Last year, over 20,000 people visited the museum. Visitors have been increasing since its opening in 1990.

“I like to hear the sound — ‘chalin’ — when I drop a coin into a bank,” says a housewife in her 50s. “And then after a while I’ll lift up the box and feel an unexpectedly heavy weight, which means I’ve saved a lot. It gives me a moment of happiness. I like that.”

Another lady, in her 60s, comments, “There are many types of money boxes available. But all of them have holes from which to remove the coins. In the past, money boxes were usually made of porcelain and unless you broke them open you couldn’t take the money out.”

“Before, especially before the World War II, money boxes made in Western countries were opened using a key,” explains Tomoyuki Ishiyama, director at the museum. “But in Japan most of them had to be smashed to retrieve the money.” According to his research, money boxes made in the West were often for purposes of collecting money for charitable donations. People dropped their spare change in the box and afterwards contributed it to some charity. Those made in Japan were simply for saving money. “But those breakable money boxes were originally from China,” says Ishiyama. Sure enough, in Chinese money boxes are called 撲滿. “撲” means to hit or to smash, and “滿” means full. So the name embodies the instructions. When it becomes full, you smash it to break it open.

Japanese people have a reputation as being habitual savers, and this has been borne out by statistics from the Bank of Japan. The total amount of financial assets owned by Japanese individuals exceeded 1,500 trillion yen ($16.6 trillion) as of 2012. More than half that figure was in the form of bank deposits. Just as they drop their coins into a money box at home, Japanese also like to save money in banks. Comparing figures with the US, bank deposits in that country occupy no less than 15% of individual assets as it seems Americans prefer to park their money in more diversified forms such as stocks, investment trusts and others.

But thanks to those hefty financial assets, which are used mainly for purchase of national bonds, Japan has avoided default on its debts and economic collapse. As of 2012, the combined debts of both national and regional governments rose to 940 trillion yen ($10.4 trillion), almost the double the amount of Japan’s GDP — situation considerably worse than Spain and Greece.

Ishiyama thinks this national propensity to save money comes from ingrained Japanese traits diligence and conservation. “Mottainai” (wasteful), a term known even outside Japan as the attitude of avoiding excess waste, is a common denominator among Japanese people. This mentality might facilitate reducing excessive consumption and help toward savings.

But the trend toward saving money is also strongly affected by the prevailing social situations. If the worries about the present, and misgivings toward the future, should increase, people will “tighten up their purse strings” and work at saving more. Wartime was a prime example. Sheldon Garon, Professor of History and East Asian Studies at Princeton University, noted in his recent book, Beyond Our Means: Why America Spends While the World Saves, that Japan kept saving and thrifty mode after its defeat in World War II, while America, following its victory, went into a spending frenzy with a bright future in mind.

No Money to Save

However, the situation now is not quite so simple. The graph above shows the household savings rate by Japanese has been declining. The savings rate in 2012 was only 1.9%, one of the lowest among OECD nations. The same year, even the US hit 4.3%. In the 1990s, Japan’s savings rate exceeded 10%.

There are numerous reasons for the gradual decline, including Japan’s rapidly aging society. Already 23.3% of the population is over 65 years old (as of 2011) and this process continues to increase steadily. Most of the older population are spenders rather than earners. Some are squirreling away their nest eggs to safeguard their livelihood.

Another often discussed reason for the declining savings rate relates to insecurity over the future of the social welfare system. If a solid and reliable social welfare system exists, citizens will not worry, with the assurance that after they retire, the country will take care of them. In Denmark, for example, some years the savings rate is 0% or less. It is said that Danes feel they have deposited their money in their country.

But a similar rationale cannot be found in Japan, where trust toward the national pension system is appallingly low. According to the research conducted by MACROMILL in 2009, more than 80% of Japanese aged 20 say they don’t trust the system. The Ministry of Health, Labour and Welfare announced the premium payment ratio for the national pension program dropped to an all-time low of 58.6% in fiscal 2011, down 0.7 of a percentage point from the previous year, for the sixth consecutive year-on decline. Experts attributed this to the increasing percentage of non full-time workers in the labor force and general distrust toward the system.

In this writer’s opinion, the reason may also be due to a declining trend in earnings. Simply stated, people’s discretionary income has declined, which means less money is available for savings. First of all, it is easy to understand that the increased in non-regular (i.e., part-time or contract) workers means less income for each household. Statistically also the overall income has been declining. According to date from Japan’s National Tax Agency, the average annual income of salaried persons peaked at 4.67 million yen ($51,888) in 1997, but by 2011 had declined to 4.09 million yen ($45,444) — more than 12%.

In addition, the number of households receiving welfare payments hit an all-time record in 2012 of 2,142,580, up 8,675 from the previous month. Those people are effectively unable to save any money. Thus Japan is caught in a bind between the world’s highest aging society and a decline in income, which combine to contribute to the lower savings rate. In a nutshell, even though people still want to save, they have no money left after outlays for their daily necessities.

As it happened, the written character 金 kin (meaning “gold” or “money”),  was picked as the character best representing the sentiment and events in Japan in 2012. The Japan Kanji Aptitude Testing Foundation, a Kyoto-based organization that promotes kanji (Chinese characters), education, conducts the survey nationwide every year. Reasons given by survey respondents for choosing 金 were varied. Some thought they reflected Japan’s gold medal haul at the London Olympics, or signified Shinya Yamanaka’s being named co-recipient of the Nobel Prize in Medicine. Other people cited increased social welfare recipients and plans to double the consumption tax to 10% in the future.

In 2011, the winning character was 絆 kizuna, meaning human bondage — a sentiment much reflected following the earthquake and tsunami disaster on March 11. A friend in need is a friend indeed. Human ties are indispensable, especially in times of crisis. True human bonds can’t be bought with money. In other words, it can also be said that less financial assets direct people toward non-monetary values like human assets.

On the other hand, Irish poet Oscar Wilde once remarked, “When I was young I thought that money was the most important thing in life; now that I am old I know that it is.” The top-picked kanji of 絆 (kizuna) in 2011 and 金 (kin) in 2012 seem to indicate that Japanese society is confronted by a paradox: money is not everything in life, but money is still important in life.

The Best-selling Book in Japan: Saka no Ue no Kumo (Clouds above the Hill)