Japan is a place where a lot of time is spent reflecting on the past. I have lived here for nearly 10 years, and nearly every piece of research I have seen, all the reports on the state of economy, all the books and articles on Japanese society seem to compare Japan with the “lost decades” and the “Bubble years” or the glorious days of the 60s and 70s when Japan was amazing the world. The future is always something to worry about, because it won’t be as good as the past.

I was really interested recently when a colleague of mine was telling me about something in the newsletter from her son’s elementary school where the 6th grade kids graduating in 2013 reported their future dreams.

What struck me was that those ambitions seemed quite specific as you might expect just a little romantic or exaggerated. After all, I think many children dream of doing something quite interesting. In a sign of a more equal world and a general trend we have been tracking where girls are increasingly feeling Japan is more “free” in terms of their possibilities, the girls were happy to pick out futures that, in the not too distant past, might have been considered “more masculine.” Here are some of the examples:

Of course, there are still some “conservative” dreams.

On the list it would seem that Japan’s youngsters are looking forward to challenging life.

What Children Want to Be When Grow up

The Dai-ichi Life Insurance Company Ltd. releases a survey every two years that asks elementary school children what they would like to do when they grow up. I had a look at the last survey undertaken in 2011 (the next one will be due in the next few months). For boys, indicative of the rise of the national team and the increasing number of Japanese players in top European teams becoming a pro soccer player is 1st for the second time running. For girls, the no. 1 is a restaurant employee which does not necessarily mean a waitress, as it often referred to working in specialist places like patisseries, high end chocolate or other specialist food functions. A few other highlights:

All of which suggests that in this broader survey kids are a bit less adventurous. Or at least that they are being somewhat realistic.

A recently English study into elementary schoolchildren’s ambitions found that what they say they want to do as adults reflects their sense of hope. Professor Eirini Flouri who ran the study believes in these aspirations are reflections resilience, self-perceptions of competence and also, unfortunately in some cases, of feelings of hopelessness. In that study, over 70 percent of the children said they wanted to be: teacher, scientist, hairdresser, sports player, fire fighter, police officer, artist, actor/entertainer, animal caregiver, vet, doctor and builder. Similar results to Japan. With the exception of a restaurant worker which seems to have a real hold over Japanese children.

A recent Mintel survey in the USA indicated that 7-11 year olds have found that most wanted to be rich. That turns out to be, because they somewhat naturally equate rich with being famous and growing up in a world of constant reality shows like The X Factor and American Idol that “educate” the idea that everyone has a chance to be famous certainly would reinforce that image. And perhaps that is a significant difference with Japan.

Of course how children dream of their future does not always result in ways we expect. I recall that in my first year in Japan, 2004, there was a survey of 10 year olds that indicated that for the first time in many years boys of that age first have a preference for “what I want to do when I grow up” moved from playing for a team like the Giants in the Nippon Professional Baseball to wanting to play MLB in the USA. Of course this was the time when some of Japan’s best players like Matsui and Ichiro were beginning to star in teams like the New York Yankees and the Seattle Mariners. At the time it seemed every team in America was wanting to sign a player from Japan. So for young boys it was a case of following their heroes. At the time there was also some discussion that this was indicative of a generation of Japanese youth who would seek out opportunities around the globe rather than stay in a Japan that did not seem to be able to shake off its post Bubble depression.

Fast forward and those same boys would now be 19 and while they may still follow MLB games, and there are examples of young Japanese taking a chance of exploring the broader world, all the evidence says that today’s college age student is not that interested in exploring the world. Much discussed figures indicate that they are studying overseas less, volunteering to work overseas less and not all that interested in spending time outside the country. Whether it’s a reaction to the Lehman shock driving a nail into ambition when they were in early high school or the disasters of 3/11 reinforcing a desire to stay close to home, a generation who said when they were 10 that their ambition was to be international heroes now likes the idea of being very domestic.

So, while I would not like to read too much into what a 10-12 year old tells us about their future, it does seem that today’s young generation are pretty typical. The boys have the same dreams of being a sports hero, but beyond that of getting a good responsible job. The girls are feeling a bit more confident.

Will these elementary students end up surprising us? Let’s hope so. The next five years as they enter a high school and look to a university will either reinforce their ambitions to be “safe” or, if they see enough opportunity arising through a changing economy, who knows what they will want. 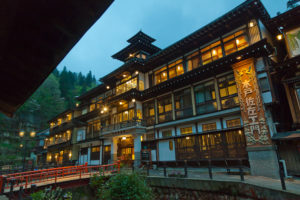 Preserving the Past in Japan: Registered Tangible Cultural Property (buildings and their plots)