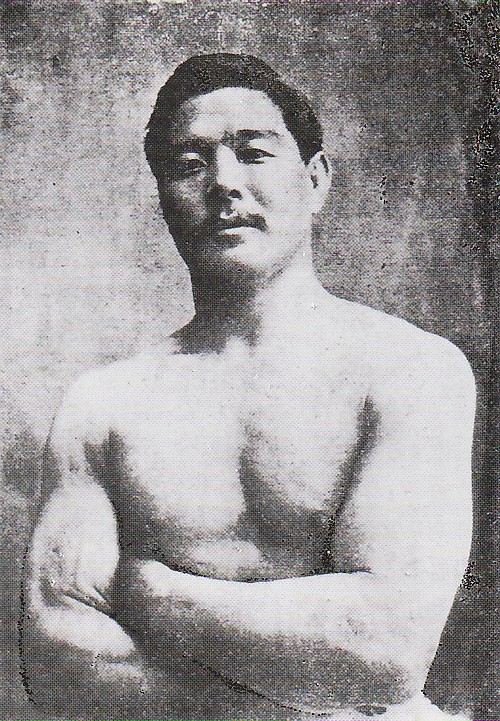 In the early 20th century, a judo practitioner from Japan toured the world fighting mixed martial arts and achieved a spectacular undefeated record. His name: Mitsuyo Maeda. In some countries, he is still remembered by his fighting name, Conde Koma. Conde, in Spanish, is an aristocratic title like Earl or Count in English.

Maeda was born in 1878 to a wealthy farming family near Hirosaki City, Aomori Prefecture. He was reputed to be a remarkably strong boy who could lift two sacks of rice each weighing 60kg (132 lb.) by the age of 12. In 1896, he went to Tokyo to study at a private high school and the following year began to learn judo at Kodokan[1], where he soon demonstrated great ability. While still at a low rank in judo, he defeated higher-ranked practitioners one after the next. After two years of training, he had already achieved promotion to the rank of black belt second-dan, and this was at a time when black belt holders were very few in number.

Maeda wanted to go abroad and told his friends, half in jest, “I want to go to the continent and become a pirate.”

But the real chance came in 1904, during the Russo-Japanese War. Tsunejiro Tomita, one of the four masters at Kodokan at that time, was dispatched to promote the culture of judo in the U.S. Maeda accompanied him with the aspiration, “On the battlefield, youngsters of my generation are fighting and dying. I, too, wish to risk my own life for Japan’s honor, through judo.”

“I welcome anyone to be my opponent.” After getting settled in New York City, Maeda ran this provocative ad in the newspaper. He had performed demonstrations of judo at military training schools or universities, but didn’t feel it generated any momentum. So he came up with the idea of promoting judo through mixed martial art matches against boxers or wrestlers. One famous contestant showed up to challenge him: John “Butcher Boy” Piening, a well-known wrestler who was reputed to be the world’s strongest at that time. A bear of a man, he stood more than 180cm (5 ft 11 in) in height and weighed 110 kg (242 lb.) — considerably more than Maeda. But the match proved to be one-sided as Maeda repeatedly threw the larger man to the ground again and again using his superior speed and various techniques.

With this win, Maeda’s name became well known and since then he had no difficulty to attract new challengers. Japan’s victory in the Russo-Japanese War also helped spread judo in the U.S. and with the recommendation of then-president Theodore Roosevelt, judo was officially adopted for the curriculum at the U.S. Naval Academy.

In 1907, Maeda journeyed to the U.K. The U.K. and Japan were in alliance back then, and many judo schools had already been established, leading to the popularity of mixed martial arts matches. But Maeda’s undefeated record didn’t stop there. He also fought with a renowned boxer named Jack Brandon. It was his first time for him to contend against a boxer. During the first 10 minutes, neither man was able to mount an attack: Brandon prevented Maeda from getting in close with a flurry of strong punches, which Maeda deflected. But Maeda eventually managed to block the punches and got inside, where he used his joint-locking technique to win. But he was not content with the win, saying, “I don’t think it is a win over boxing. I need to have more fights with boxers. I haven’t learned boxing yet.” He then taught himself boxing and wresting and incorporated those techniques into his existing repertoire.

Following his tour of the UK, Maeda traveled to Spain, and both Central and South American countries to promote and teach judo. He was said to have never lost in matches which amounted to more than 1,000. And through numerous mixed martial arts matches, he developed his own style of judo techniques that were said to be applicable against any form of martial arts. His own style became the basis of Brazilian Jiu-Jitsu which has remained popular, especially in South American countries. But at the same time, his openness in incorporating new techniques learned through various matches was not well received by the conservative judo establishment in Japan.

Before Maeda turned 40, another idea grew in his mind: to assist Japanese immigrants. He was discontented with the anti-immigration movement that arose on the U.S. west coast and sought a place where Japanese immigrants would feel safe to live.

In 1915, he arrived in Belem, Brazil, a port town at the mouth of the Amazon River. Maeda was enchanted with unspoiled nature there and decided to settle down. He opened a judo school in Belem. One of his students was Carlos Gracie, who, based on judo training, joined with his brothers to establish his own martial art technique, which became known as Brazilian Jiu-Jitsu (柔術).

In 1922, well past the age of 40, Maeda withdrew from the front lines of judo to assist Japanese immigration to Brazil. From 1924 to 1927, Japanese immigration inspection groups visited and Maeda functioned as a middleman between Japanese government and the Brazilian state government. In 1929, immigration finally took off and he worked to support it and look after the immigrants. The settlement and the reclamation work in the jungle were daunting tasks, and many of the immigrant farmers contracted illnesses, and their crops met with numerous difficulties. But he tenaciously provided support to those settlers. He himself married a British woman and became a naturalized Brazilian citizen, never returning to Japan.

Whether a giant opponent standing over 200cm in height or the virgin rain forest, all proved to be worthy opponents for Mitsuyo Maeda. He passed away in 1941 and was buried in the Brazilian city of Belem.

A century ago, Maeda’s glory abroad was often cited in magazines for Japanese youth. And now in a new Kindle version, Amazon Japan has released a comic series about the days when he competed as “Conde Koma.”

[1] The Kodokan was founded in 1882 by Kano Jigoro, the founder of judo. Now it is the headquarters of the worldwide judo community.

Different Desires in Japan and China

The Man Who Saved the Country, Japan and the World